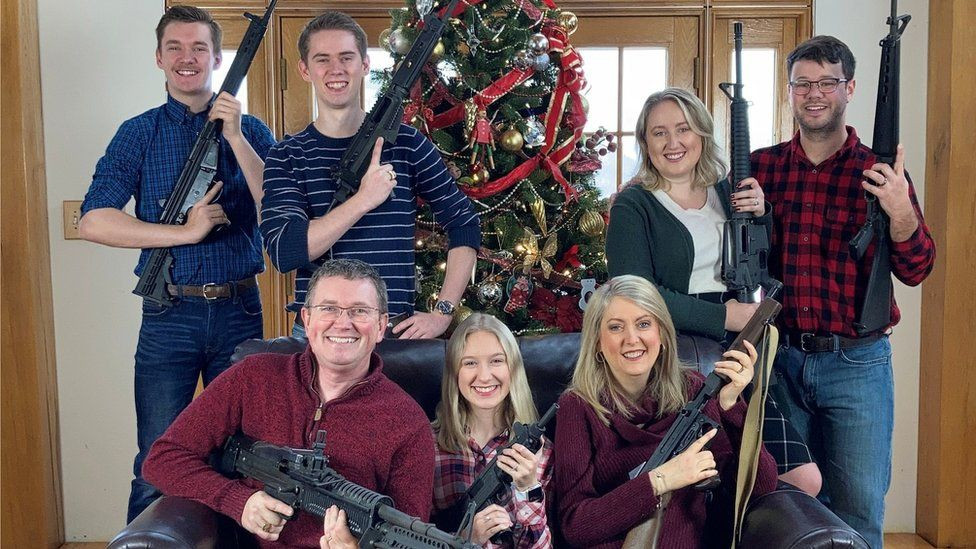 US congressman, Thomas Massie is facing a barrage of criticism after he posted a Christmas photograph of his family posing with military-grade rifles, just days after a deadly school shooting.

The post has been condemned by a host of families affected by gun violence, and it comes days after the tragic school shooting in Michigan which left four teenagers dead and seven people injured after a 15-year-old student allegedly went on a rampage using his father’s gun.

Despite receiving condemnation for the insensitive post, Massie seems not to be disturbed as he has retweeted messages of support and criticism- directly engaging with Twitter users who said he was “tone deaf” and “insensitive”.

In response to one person who wrote the “bar was on the floor, but somehow you managed to tunnel underneath it,” the 50-year-old lawmaker said that “The BAR is under the couch,” referring to a type of military assault rifle.

The families of students killed in previous school shootings have spoken out against Massie’s post.

A man, Fred Guttenberg’s daughter Jaime was killed in the Parkland high school shooting in Florida in 2018 – one of the worst school attacks the US has seen, also commented.

He posted a photo of Jaime, and also a photo of her gravestone under the congressman’s post.

@RepThomasMassie, since we are sharing family photos, here are mine. One is the last photo that I ever took of Jaime, the other is where she is buried because of the Parkland school shooting.

Manuel Oliver, whose son Joaquin also died in the Parkland attack, told CNN that the tweet was in “the worst taste ever”.

Adam Kinzinger, a Republican congressman from Illinois, said he djsplayed a “gun fetish” with the post.

Anthony Scaramucci, who was briefly former President Donald Trump’s communications director, tweeted that he would fund any potential candidates running against Massie in next year’s congressional elections.

In 2020, gun violence killed nearly 20,000 Americans – more than any other year in at least two decades – according to data from the Gun Violence Archive.