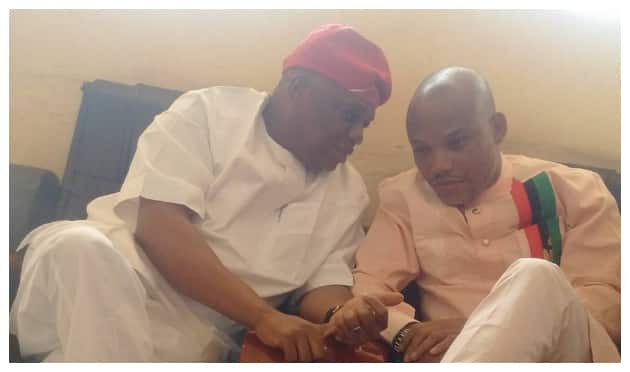 Orji Uzor Kalu has denied reports he is working with the DSS against IPOB leader, Nnamdi Kanu.

Nnamdi Kanu’s brother on Monday, December 6, alleged that Department of State Services (DSS) operatives have denied the separatist leader food and also not allowed him to see his test results.

Reports also circulated on Monday that former Abia state governor, Orji Uzor Kalu told DSS operatives not to feed Nnamdi Kanu after his visit to Kanu in the DSS facility in Abuja on Monday, November 29.

The senator has now come out to debunk the reports saying the news is spurred by his detractors and nothing but “a big, fat lie”

He urged Nigerians to ignore the story.

“A friend said the statement below is been circulated on social media and I urge you to please ignore as it’s a big fat lie and cheap propaganda. “The circulating lie says, “When Senator Orji Uzor Kalu visited DSS and Mazi Nnamdi, he told the DSS to stop giving Nnamdi Kanu food and Nnamdi Kanu has been living without food since then ” “My brief take is that there is nothing one would do that people won’t talk about. If you don’t visit, they will blame you for not visiting.

“If you visit, they will still blame you. But more sympathetic to me is those that believe and propagate any cok and bull story. If the agenda is to create hatred between me and my brothers, it’s a waste of time because my people love me and I love them too. I will always respond to hate with love.”