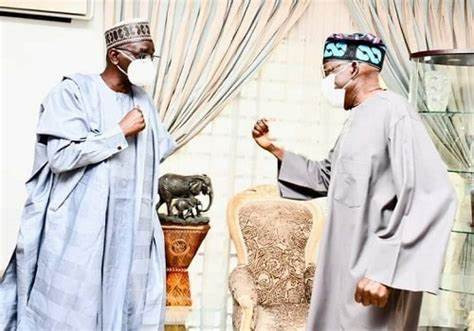 Tinubu wanted to know my issue with Governor Ganduje

Former governor of Kano State and leader of G-7 faction of the All Progressive Congress (APC) in Kano, Senator Ibrahim Shekarau, has disclosed what he discussed with Asiwaju Bola Ahmed Tinubu, National Leader of the APC.

The senator representing Kano Central told BBC Hausa that he visited Tinubu at his Lagos residence after consulting members of the G-7.

“He called me on phone that he wanted to see me in Abuja, but that time I was in Kano, so we couldn’t see. He said we should meet in Lagos if possible and I told him I will whenever I visited Lagos and that was what happened.

“This is not something new between the two of us. We have had a lot of this type of meetings even during merger almost eight years ago and when we were governors.”

On what they actually discussed, Shekarau said Tinubu wanted to know why he is at loggerheads with Governor Ganduje.

“I told him it is not a fight between Shekarau and Governor Ganduje. It is rather an issue between the G-7 and leadership of the party in Kano. And our reason for that is party members are not given their right and freedom on anything related to the party.

“He told me that he heard from Governor Ganduje and he wanted to hear from me, so that we can get to know the faulty side. We sat and I briefed him on all that happened from the beginning up to the recent court judgment.”

When asked if they discussed anything that has to do with supporting Tinubu on his presidential ambition, Shekarau said;

“There is nothing like supporting him. As I told you he requested me to see him. So both of us are leaders in the APC, and we have good relation. So with or without this crisis happening in Kano, we can meet and discuss issues of our great party.”

On if  Tinubu promised to take any action regarding the feud in Kano, Shekarau said it is left for him to decide.

“He listened to them and he listened to our side, so whatever remains is left for him. If he will offer an advice to them or to the party is all well with us.”

Speaking further on whether the G-7 is diving for Tinubu’s support ahead of the coming of swearing in of the elected party leaders, Shekarau said no, and that they are not even aware of any decision by the party to swear in the leaders.

The Senator also revealed that they are not against the reconciliation committee of the party under the leadership of former Nasarawa State Governor, Senator Abdullahi Adamu, adding that all of the parties involved agreed that they should wait for court decision.

“I didn’t go there to seek for any support and I’m not even aware that the National leadership of party’s decision to swear in the new state leaders.

“During our discussion with them, it was even Governor Ganduje that advised the issue of party leadership should be put aside until the court makes the final judgment. And we too agreed with that, even the committee members agreed with that.”