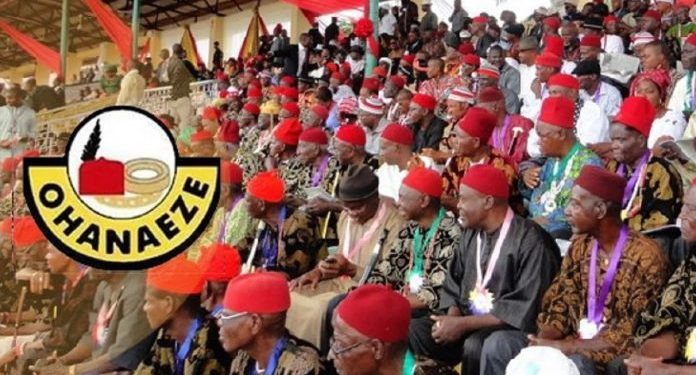 2023 Presidential Election: South East ready to speak with one voice

Socio-cultural group, Ohanaeze Ndigbo has assured Nigerians that the South East geo-political zone would this time speak with one voice in its quest to produce the next president of the country in 2023.

President of its national youth wing, Damian Okafor, said that the era when Igbo politicians spoke with discordant tones in their aspiration to protect the political interest of the zone was over.

He stated this in Abakaliki on Tuesday, December 7, after he led members of the group to inspect projects executed by Governor David Umahi.

He said this was the first time Igbo leaders were showing such oneness despite belonging to different political parties.

“The South East geo-political zone cannot afford to miss the opportunity of 2023. It is time to speak with one voice. I am happy that as we speak, Igbo leaders are united in their quest for Nigeria president of Igbo extraction in 2023.

“All our political leaders, both in the All Progressives Congress (APC) and the Peoples Democratic Party (PDP) are also saying ‘give us 2023, it’s our turn.’ This shows that the South East is ready to speak with one voice irrespective of political differences to ensure equity and justice.

“Let me use this opportunity to appeal to our governors, National Assembly members, traditional rulers and all  leaders of the zone to consider organising a political summit for us to discuss how to go about reaching out to other zones concerning the presidency.

“This is not the time to sit down and be waiting; expecting political manna to fall from heaven. We must speak with one voice this time,” he said.

They don’t bully you as much as they bully me – DJ Cuppy tells sister, Temi