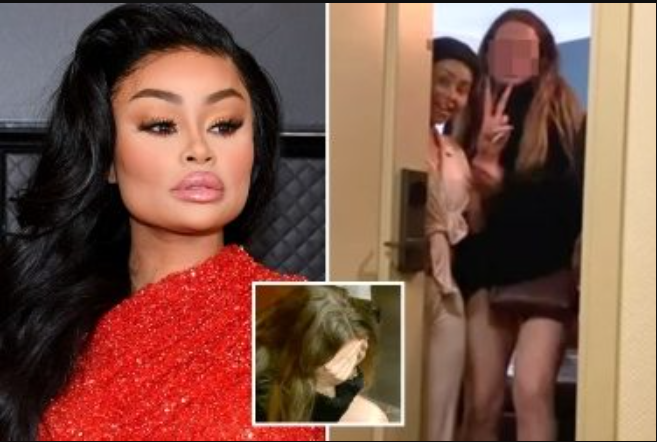 Blac Chyna is reportedly involved in a police investigation after a woman claimed she was “held hostage” in a hotel room during a “drug-fueled” party.

In a video exclusively obtained by The Sun, a young woman bursts out of a hotel room at the Sacramento Sheraton Grand after Chyna, 33, allegedly held her against her will.

The ordeal was captured by the woman’s friend Ron Knighton, 35, who told The Sun that they had been invited to Chyna’s hotel suite for drinks after a Black Friday party she had hosted in town.

“Everyone was enjoying themselves; the drinks were flowing and the energy in the suite was real good,” Ron said.

The pair were enjoying the late-night after-party when Chyna, whose real name is Angela Renée White, suddenly became agitated with Ron’s friend.

“Suddenly out of nowhere Chyna just yelled at my friend to ‘shut the f*** up’ or she’d beat both our a**es.

“The vibe immediately changed so at that point we thought it was best to leave – but when I went to walk out she shut the door behind me and kept my friend in the room.”

After about 20 minutes of Ron waiting in the hallway, others who appeared to be with Chyna’s entourage came up to her suite and knocked on the door.

In the footage, Chyna can be seen unlocking and opening the door.  Ron then tells his friend to come out, and the young woman bursts through the opened door from behind Chyna and runs down the hallway sobbing.

Chyna was heard telling them to stay outside in the hall when Ron shouts back: “We aren’t staying anywhere- we are leaving! You crazy?”

As the pair begins to make their way toward the elevators, Chyna follows them out, as the young woman continues to sob.

Ron tells his friend as they walk into the elevator: “It’s not your fault. She’s high on cocaine and crazy.”

“You’re not going to disrespect me and kept my friend in the room… Ain’t no way that’s right.”

Ron added to The Sun: “It was really strange because the evening actually started really well.”

Then Chyna “wouldn’t let her leave even though my friend was crying and shouting – she was being a total bully.

“I don’t know what she was trying to achieve but it was just embarrassing and a very disturbing end to the night.”

After the incident, Ron said his friend called police.

The Sacramento Police Department told The Sun that they were made aware of a disturbance at the hotel on November 27 at 3 AM.

A spokesperson said: “A dispute between two parties occurred, and the incident was resolved at the scene by the individuals involved. No injuries were reported.”

“The department is actively investigating the circumstances surrounding the incident and the investigation remains active.”