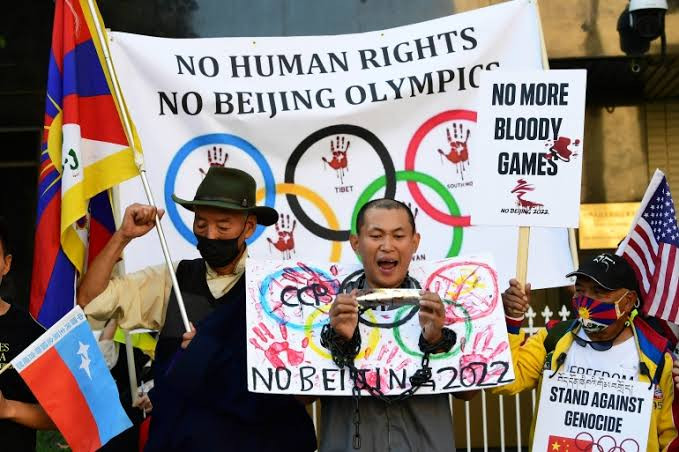 China warns US, UK, Canada and Australia that they will ‘pay price’ for Olympics boycott

China has warned countries who have announced a diplomatic boycott of the Beijing Winter Olympics that they “will pay the price for their mistaken acts”.

The US, UK, Australia and Canada will not send government representatives to the Games because of concerns over China’s human rights record and it’s abuse of Uighur muslims.

France, unlike the above mentioned western countries, said it will not join the boycott.

France is the host of the next Summer Games.

The Winter Olympics are set to take place in Beijing in February.

“The United States, Britain and Australia have used the Olympics platform for political manipulation. They will pay a price”  Wang Wenbin, a spokesperson at the Chinese foreign ministry, said.

Chinese state media claimed on Wednesday that Beijing “never planned to invite US and Western politicians who hype the ‘boycott’ topic”.

The US was the first country to announce a diplomatic boycott, with Australia, Canada and the UK following suit.

The move by these countries stops short of preventing athletes from attending – something which has been welcomed by International Olympic Committee (IOC) President Thomas Bach.

“The presence of government officials is a political decision for each government so the principle of IOC neutrality applies,” he said.

Relations between the US, UK, Australia, Canada and China have been tense in recent years.

Relations are also strained over a crackdown on political freedoms in Hong Kong and concerns over Chinese tennis player Peng Shuai, who was not seen for weeks after she accused a top government official of sexual assault.

For Canada-  the relationship has been Rocky after the arrest of a top executive with Chinese tech giant Huawei, and the subsequent detention of two Canadians in China. All three were released earlier this year.

New Zealand says it’s not sending its officials due to the pandemic but has also raised concerns in the past about human rights issues in China.

Other countries – including Japan – are said to be considering diplomatic boycotts of the Games.