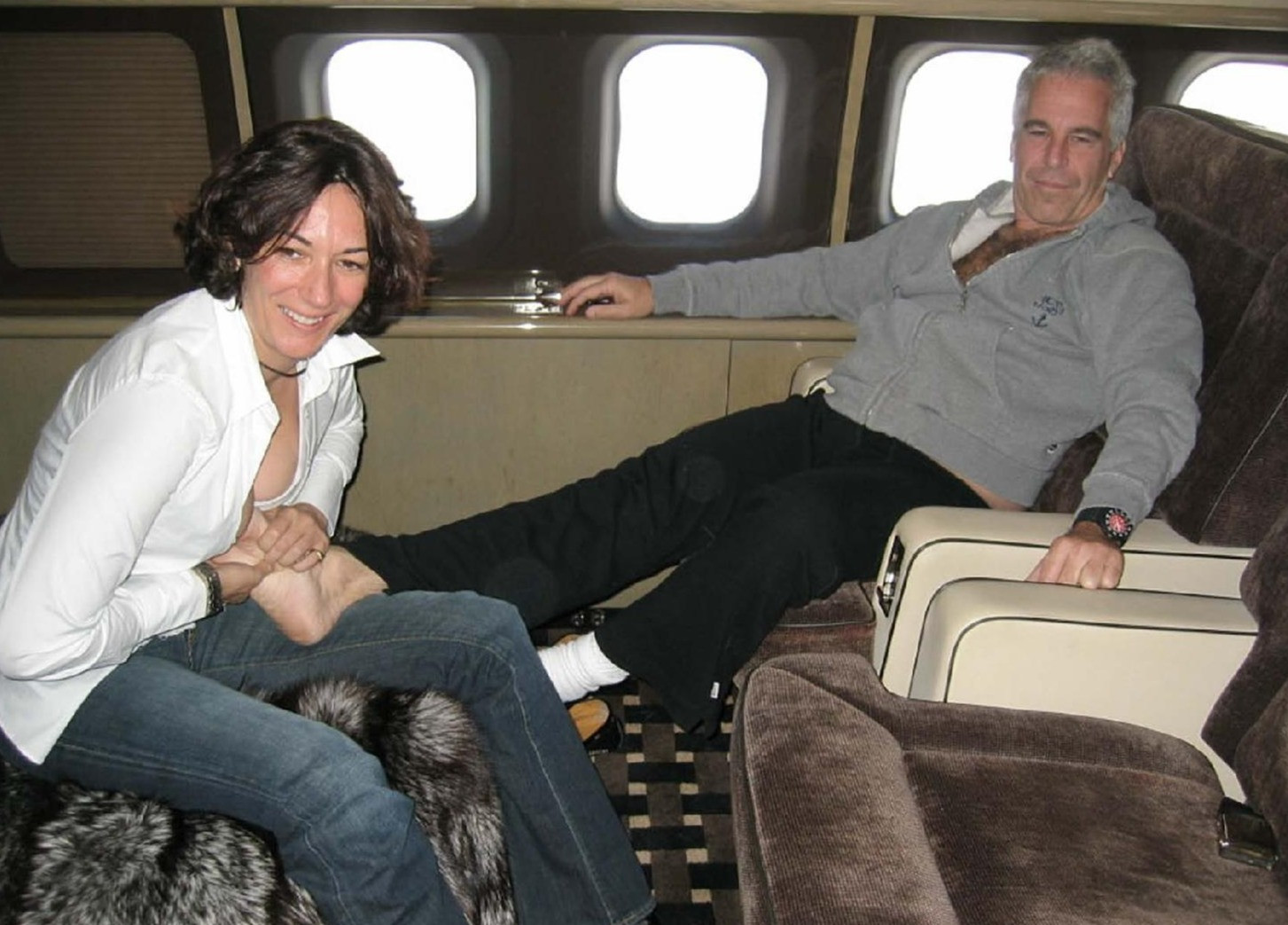 A never-before-seen intimate photos of Ghislaine Maxwell rubbing the feet of Jeffrey Epstein aboard his private jet have been released by prosecutors.

The photos were released by prosecutors to prove the pair were ‘partners in crime.’ They were released as evidence of how close the late millionaire paedophile Epstein was with the 59-year-old British socialite Maxwell, now standing a trial, facing criminal charges for allegedly recruiting and grooming minor girls to be sexually abused by Epstein from 1994 to 2004.

In some of the photos, Maxwell was seen giving Epstein foot massages, with his bare feet pressed up against her chest aboard what appears to be Epstein’s private plane.

Epstein was also seen with an arm around Maxwell in some photos as they sat outside what appears to be a cabin, one on a plane, and another at a formal event, where Epstein is seen holding a phone to his ear.

The full album of 19 images reveal the one-time couple, longtime associates’ glamorous lifestyle taking private jets to exotic locations for trips. One photo shows Maxwell sunbathing on a yacht, while several others show them throughout Europe.

Prosecutors used the trove of photos to bolster their argument that the pair were so close, it stood to reason Maxwell participated in Epstein’s abuse of underage girls. Throughout the trial, prosecutor’s goal has been to prove the pair were ‘partners in crime’ in recruiting and grooming young girls from 1994 to 2004.

Other images revealed Tuesday in court show ‘Help Wanted’ flyers, presumably created by Maxwell, for a massage therapist. ‘Are you a massage therapist ?? Work in Palm Beach home,’ the flyer, written entirely in caps read, noting an offer of excellent pay and mostly weekend shifts.

Last week, photos from the 2005 FBI raid of Epstein’s residence in Florida were produced that depicted his bathrooms and bedrooms but did not show explicitly sexual items. His green massage table was unveiled in the court during a former Palm Beach police officer’s testimony, who said, that he had retrieved the item during a raid at the late financier’s property.

Photographs taken from a 2005 FBI raid of his Florida home, reveal its bathrooms and bedrooms, without featuring any explicitly sexual items.

Maxwell, 59, faces six charges related to recruiting and grooming four underage girls for him. Prosecutors allege she helped recruit girls to give him sexual massages. Maxwell has denied all charges.

Lawyers for Maxwell have said that her accusers’ memories have been corrupted over time, and that she has become a scapegoat for Epstein’s alleged crimes because he is no longer alive.

Prosecutors are expected to call the fourth woman identified in Maxwell’s indictment to begin testifying as soon as Wednesday afternoon.

They have said that they may wrap up their case by Thursday, about two weeks faster than they originally forecast. The defense would then have a chance to present a case, but its unclear whether Maxwell will testify.

The evidence negates the defendant British socialite’s denial of having a role in Epstein’s trafficking case. She pleaded not guilty and maintained her innocence contradicting that she played any key role in grooming underage girls for paedophile financier, and was partisan in alleged sex-trafficking as prime scheduler and recruiter.

US attorney’s Office for the Southern District of New York was briefed that Maxwell and Epstein’s enterprise ran a “pyramid scheme of abuse” and the now jailed Maxwell allured young girl victims on behalf of Epstein.

During the opening argument, assistant US Attorney Lara Pomerantz told jurors, “even when she was not in the room, make no mistake, she knew exactly what Epstein was going to do to those children when she sent them to him inside the massage rooms, massage rooms inside the houses the defendant ran for over a decade.”

No Tax Identification Number, no bank account, according to 2021 Finance Bill