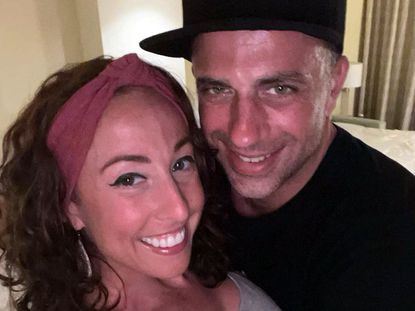 A man stabbed his girlfriend to death with a sword and stuffed her in the closet of his apartment before calling police to falsely report a robbery.

According to a New York police statement on Wednesday, December 8,
the murder was revealed after the suspect, Peter Ikonomou’s mother arrived at the apartment because she hadn’t heard from him in a while.

When Ikonomou, 37, opened the door he was irate and appeared to be under the influence of drugs, according to police. Before his mother and a friend could step inside, Ikonomou slammed the door and ran back inside.

As the two tried unsuccessfully to get in, Ikonomou was spotted on the balcony of his apartment screaming that he had killed somebody, police sources said.

The man dialed 911 and told a dispatcher that “fake cops and locksmiths” were trying to break into his Briarwood apartment, police said.

Once cops arrived, the distraught mother told them that she feared for her son and the safety of his girlfriend.

When cops got into the apartment on 85th Road, Ikonomou met them at the top of the stairs with a stick in his hand, police said. He told cops his girlfriend was “in the closet,” sources said.

There, they found the body of Mindy Singer, 35, with a 46-inch sword still stuck in her backside.

The NYPD had no records of previous domestic incidents involving the pair but Ikonomou has seven prior arrests, including for drug possession and driving while on drugs, police said.

He reportedly struggled with police as they put him in a squad car and kicked out a window as he sat in the back seat, witnesses said.

“It’s scary,” added a neighbor who lives across the street. “I feel sorry for the girl and her family. That’s crazy for him to do that. I would never think something like that would happen around here, and what would make you do something like that? Why would you kill her? It’s sad. It’s just sad. I don’t understand what goes through people’s heads.”

Friends wrote on social media that Singer was well known on the city’s club scene, organizing parties and connecting DJs with various venues.

“This loss is a massive one,” one friend wrote. “It’s hard to process how someone so great is taken from us like this. She was loved by so many of us. This isn’t fair at all.”

Singer’s aunt, Debra Levine, wrote on Facebook that the family is “devastated.”

“My heart is broken and my family and I will never recover from this nightmare,” Levine wrote. “Words cannot do this outrageous tragedy justice.”

TECNO CAMON 18 Has A New Ambassador And It’s No Other Than Mazi Whitemoney!