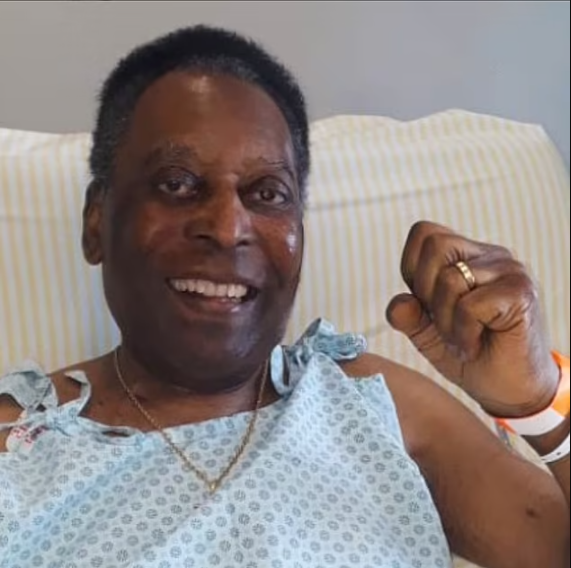 Brazil legend Pele, 81, to remain in hospital ‘for a few days’ to undergo tests after his last chemotherapy session for a colon tumour

Brazil legend, Pele has revealed he will remain in a hospital in Sao Paulo ‘for a few days’ to undergo new exams on his colon tumour.

The 81-year-old Edson Arantes do Nascimento was hospitalized this week at the Albert Einstein hospital this week for chemotherapy sessions to treat the tumour found during routine exams at the end of August. Pele was hospitalised for almost one month due to the surgery to remove it.

Pele said on Instagram he has been ‘having small chemotherapy sessions as part of my treatment.’ He added he had just finished the last session of 2021.

‘I wanted to share this achievement with you. After all, every little victory is a reason to celebrate, don’t you think?’ he wrote, with a picture showing him in a hospital gown and a clenched right fist.

‘Don’t worry, I’m just getting ready for the holiday season!’

Kely Nascimento, the eldest daughter of the three-time World Cup winner, gave fans an update on his health Wednesday, posting a picture of him smiling after a scheduled operation.

She wrote: ‘My sister Flavia Kurtz is giving him a hug for me! In two or three days he returns home to enjoy Christmas.

‘This was not a surprise. It was already scheduled and is part of the treatment. All my gratitude, always.’

Pele, often held up as the greatest to have played the game and still Brazil’s all-time record goal-scorer, was first diagnosed with cancer back in August.

Doctors discovered the tumour in his right colon during a routine check-up.

He underwent emergency surgery in September and spent a month recovering in hospital including a short stay in an intensive care ward. Pele was later released from hospital in October, and returned home to continue his recovery.

Pele has suffered a series of health issues over the last decade, particularly with his hip, and he cannot walk unaided.