A viral video of a bride who blatantly refused to kiss her groom on their wedding day has got people talking. 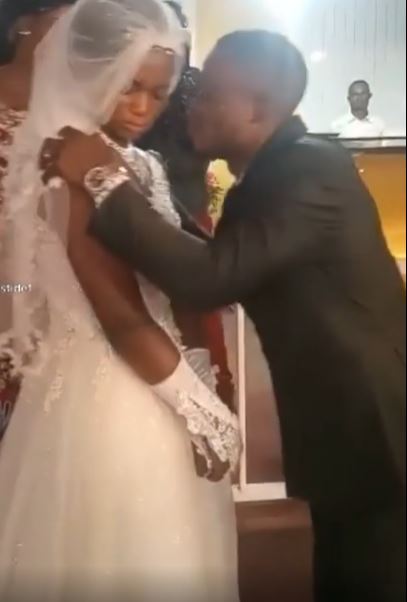 After exchanging marital vows the officiating minister asked that the couple share their first official kiss, but the bride refused despite several attempts from her husband.

The groom tried severally to kiss his bride amid cheers from the guests but she refused. As the bride, who had on a gloomy look, kept removing her face to dodge the kiss from her husband, he planted the kiss on her cheek.

The look on the bride’s face and her reaction to the kiss made social media users suggest that the marriage was forced.

See some comments below,

@Riyiadeblack, “Because she isn’t happy with the marriage, they forced her”

@bae.sparkles, “She looks very angry eiih is it by force to marry or she is in depth”.

“I knew ‘Made In Lagos’ would be a mega success” – Wizkid