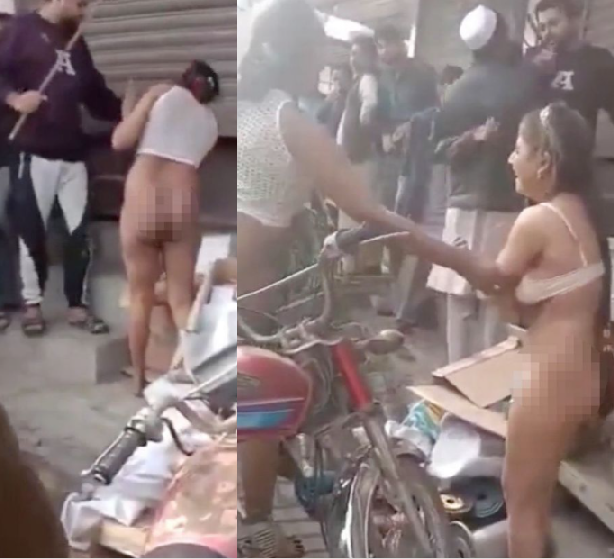 A video shared online shows four women being stripped, beaten, and paraded as punishment for allegedly stealing from a local shop in Pakistan.

The women were accused of shoplifting in Faisalabad, Punjab, and were said to have been accosted by locals.

In the video, the women enter the shop where a man is working and appear to take items off the shelves.

The shop employee leaves the premises and the women soon follow suit.

In a later clip, one of the women is seen crying as she crouches on the floor.

Another woman is dragged in by three men by her ankles and wrists and then dumped on the floor near the first woman.

A third woman, who is naked from the waist down, and a fourth woman, who is also naked, are seen crying as they are beaten with what appears to be a stick.

The women are shouting and crying during the brutal attack and attempt to shield themselves with their arms.

After the beating, the women were reportedly “paraded” up and down the street naked for an hour before the Punjab police were alerted and came to intervene.

Five people were arrested at the scene.

Watch a video of the assault below.

Below is a video purportedly showing the women ‘stealing.’

Brazil legend Pele, 81, to remain in hospital ‘for a few days’ to undergo tests after his last chemotherapy session for a colon tumour

Google to give all employees worldwide $1600 bonus for holiday season