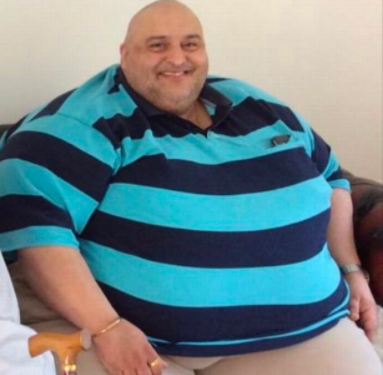 One of UK’s largest men is celebrating after shedding over 190KG of weight.

Harvey Olikh used to weigh over 317KG but has now lost over half his weight after a health scare.

He was taken to hospital in November 2019. Doctors were amazed he wasn’t bedbound and one doctor warned him: “If you live like this, within two years you will be dead.”

Harvey was placed in intensive care for four days after catching a cold and it finally prompted him to start shedding weight.

The 48-year-old said: “This weight loss is a gift that keeps on giving – and it’s not just for Christmas!

“It’s like I have woken up after Scrooge’s three ghosts and I’m alive.”

To lose weight, he stopped drinking but still ate thousands of calories.

He finally decided to take weight loss seriously after he got sick of being mocked for his size. On one occasion, he was turned away from a hotel as the owner feared he would break the stairs.

Now, after a year of fasting and healthy eating, he is just over 101KG and loving life again.

Harvey, of Romford, Essex, said: “I can go to the cinema with my wife, I can go shopping with her, I can go on holiday and go mountain trekking.”