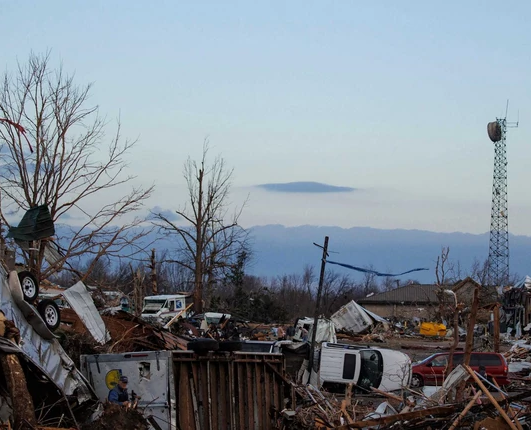 Trapped employees cry for help, many feared dead as Kentucky candle factory collapses with over 100 employees in the building (video)

Many are feared dead after a tornado tore through Mayfield, Kentucky, overnight, flattening a candle factory with over 100 workers inside, destroying a fire station and cutting off power and water for miles.

110 people were working at Mayfield Consumer Products in Kentucky when the building collapsed Friday night, Dec. 10.

The family-owned company that makes branded candles and home fragrance products was operating a second shift with more than 100 people in the building when the severe weather hit.

Gov. Andy Beshear fought back tears during an emotional press conference late Saturday morning, Dec. 11 as he and local officials tried to describe the scope of the destruction they had witnessed in the community of about 10,000 people located in the southwest corner of Kentucky.

About 40 people have been rescued from the rubble, Kentucky Gov. Andy Beshear said during a Saturday press conference. About 110 people were working in the facility when the storms arrived and at least 70 people are feared dead across the state, he said.

In a harrowing video posted on Facebook, Mayfield employee Kyanna Lou documented her experience of being trapped behind a wall along with several colleagues after the roof collapsed.

She was later rescued.

Jeremy Creason, Mayfield’s fire chief and EMS director, said at the candle factory site crews “had to, at times, crawl over casualties to get to live victims to get them out, and mark those casualties as we work our way through the rubble. That’s just a picture of what they’re dealing with down there.”

The community’s main fire station was in the direct path of the tornado and was destroyed, along with the town’s fleet of police cars and a police station, local officials said. Surrounding communities were providing support, including 11 ambulances to assist with rescue-and-recovery efforts at the factory and throughout the county, Creason said.

Graves County Judge Executive Jesse Perry said there is no water in the county and power is out for miles around Mayfield, asking repeatedly for prayers.

Below is a video of trapped employees crying for help.

Religion is number one problem for Nigerians