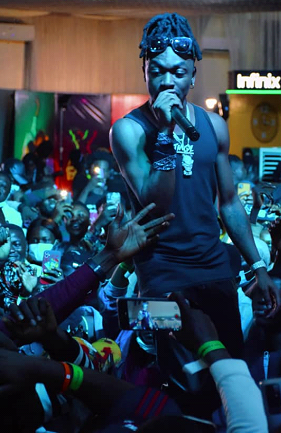 What other event do you get to see Mayorkun, DJ Kaywise, Ruga, Simi and DJ Xclusive for free? The Infinix Fans party

It’s that time of the year again where we sit back, relax, have parties and unwind in readiness for the responsibilities of the new year. Parties are the next best thing this season in the quest to unwind and have fun before the new year comes knocking. So, it was no surprise that the #InfinixFansParty 2021 had a massive turnout, especially since it couldn’t hold last year because of the pandemic.

If you did not attend the biggest party of the year, not to worry, as we’ve got you covered with the inside gist of what went down at the party. From food to drinks to music and dancing, the event was all shades of lit.

Twistberry performing at the Infinix fans

First off, let’s look at the party Fans Party event participants. Aside from the amazing Infinix fans, I mean, Infinix Generals as they were addressed, there were star performances from music artists like Ruga, Mayorkun, and DJs; DJ Kaywise, and Pepsi brand ambassador, DJ Xclusive. The fans also had groups of dancers with electrifying dance moves to entertain the audience, and a winner was chosen at the end of the event. The boisterous crowd came ready to party, and party they did. The party was supported by Pepsi and Johnnie Walker for non stop refreshments and party cocktails .

Simi had a celebrity appearance, and she came in grand style, looking like an angel dropped from heaven. Awards were presented to fans who have had the opportunity to grow and are still growing with Infinix. From Twistberry—winner of record promotion with Davido, to @Iamsupatosh—winner of extreme sports challenge, to OYC—winner of 1 million naira grant and latest tech reviewing marvel—Izzy Boye.

Simi at the Infinix Fans Party

The brand is committed to doing better and serving fans with the latest technology to help them live their best lives and fuel their hustles. They have helped a few fans to move their hustle to a higher level through campaigns, and they will continue to do more.

The event was held on the 10th of December, 2021, at the Centre for Management Development (CMD) Lagos, sponsored by Pepsi and Johnnie Walker.

For more juicy details and information on other activities lined up for this season, follow @infinixnigeria  on Instagram.