“I’m too fresh for this” – BBNaija Star, Mercy Eke, says as she rides a bike in Lagos (Video)

Reality TV star, Mercy Eke, has shared a video of herself riding on a bike popularly called Okada in Lagos. In the video which she shared on Snapchat, Mercy, who noted that she’s too fresh to be spotted on a bike, revealed that she had to hop on a bike to beat the hectic Lagos traffic. 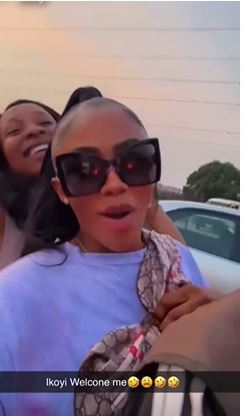 An Instagram user @liz_world25_ wrote, “I am sure you enjoyed the ride still… Natural AC 😂”.

@lulusmooth, “Lagos traffic will humble you if you see me for bike mind your business not ready to wait for 4 hours traffic to clear”.

In other news, Mercy Eke has stated that she is the hardest person to catch.

The reality show star made the comment in reaction to being linked to so many men. According to her, it’s not easy to “chill with her or get her attention”.

Mercy Eke also said that she can’t be hidden in a relationship because she is a “golden fish”.

“If I want to do Olosho work I won’t charge N500k because I can give people more than that” – Reality star, Ifu Ennada