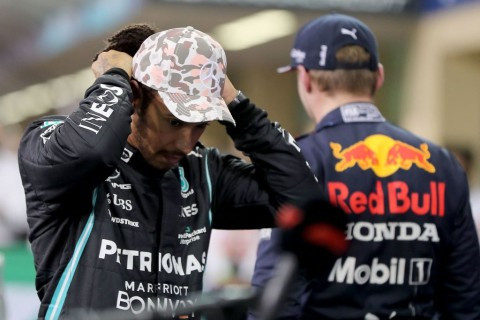 Mercedes have decided to abandon their appeal against Max Verstappen’s controversial win at the Abu Dhabi Grand Prix, after Lewis Hamilton said he doesn’t want his record breaking 8th formula one win to be decided in the courts.

The British driver missed out on the Formula One title on Sunday, December 12, despite having dominated for much of the race, with a late safety car – and contentious restart allowing Verstappen to overtake Hamilton.

Mercedes team principal, Toto Wolff was angry with FIA race director Michael Masi at the time, yelling it ‘was not right’ while Hamilton was heard over the team radio saying the result had been ‘manipulated’.

But Red Bull, the car company Verstappen is signed onto, insisted they won fair and square.

Mercedes early this week lodged lawsuits seeking to overturn Hamiltons loss, both of which were rejected. Mercedes were set to appeal, but have now ditched their appeal.

In a lengthy statement which shared their dismay at how things unfolded, and praised Verstappen, Mercedes said:

‘We welcome the decision by the FIA to install a commission to thoroughly analyse what happened in Abu Dhabi and to improve the robustness of rules, governance and decision-making in Formula 1.

‘We also welcome that they have invited the teams and drivers to take part. The Mercedes-AMG Petronas team will actively work with this commission to build a better Formula 1 – for every team and every fan who loves this sport as much as we do. We will hold the FIA accountable for this process and we hereby withdraw our appeal.’

The U-turn was largely triggered by Hamilton who does not want to win such a momentous and historic title in the courts, while he feels it is in the best interest of F1 not to proceed down a legal route.