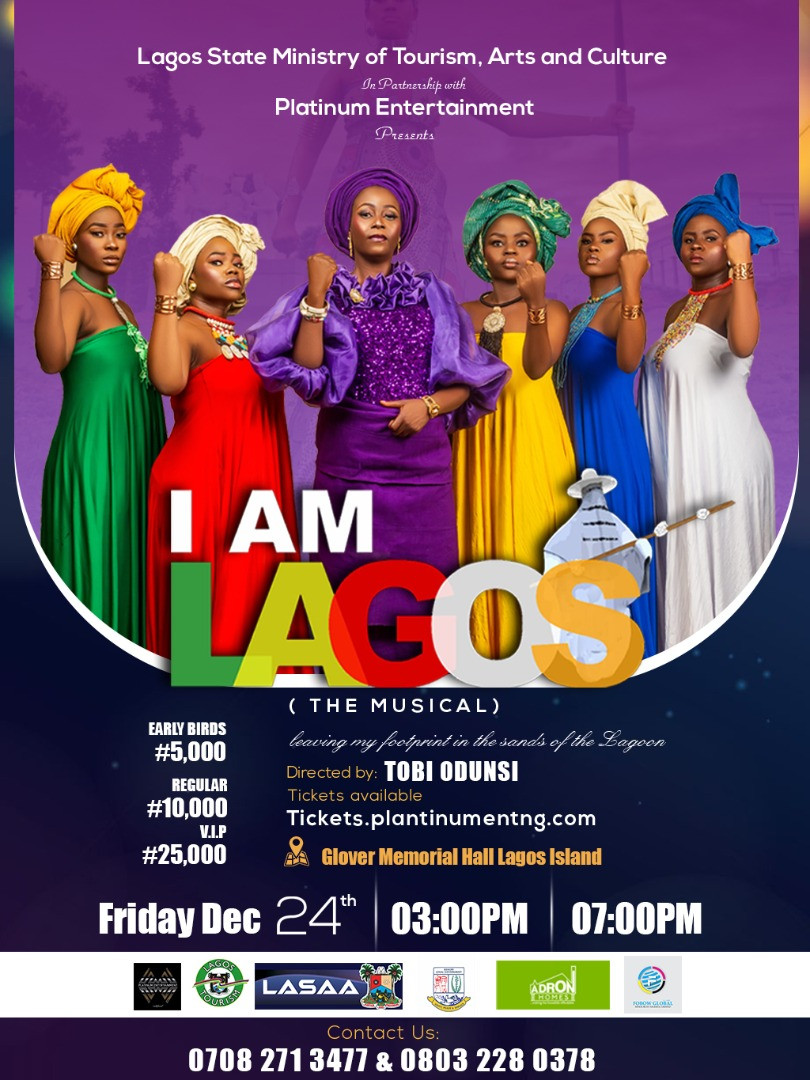 (The Musical) leaving my footprints in the sands of the lagoon

Lagos State Government Ministry of Tourism, Arts and Culture in partnership with Plantinum Entertainment Nigeria Limited sets to epitomize the concept of Queen of IBILE Pageant, Awards and Reality through the performance of I AM LAGOS the musical on stage at the Glover Memorial Hall, on the 24th December, 2021, 3pm and 7pm as its Showcase. It is parental guarded, educating and entertaining the populace on Lagos traditional roots and cultures. Suitable for the general public.

I am proud of my LAGOS the land of the lagoon, seas, oceans, foreshores and swamps. A land covered with water whose water bodies forms her peculiarities establishing her as a noble land for noble men and women. Eko Akete Ilu Ogbon, Ar’omisa legbelegbe

This performance brings to forbear the history of LAGOS as a man’s land, dramatically discussing the values of LAGOS as a state apace with the T.H.E.M.E.S agenda of the present LAGOS State administration. Explored in the performance for social regeneration is our socio-cultural values. Furthermore, the performance uses musical drama as a tool for the preservation of the LAGOS culture and building the spirit of LAGOS in the heart of her audience while educating on the ideals of civic engagement and responsibilities for a better state and national development. This performance has infusion of African Total Theatre style which gives it a well deserved uniqueness.

I AM LAGOS: leaving my footprints in the sands of the lagoon, is a one day explicit and unique event.. I Am LAGOS the musical masterpiece was inspired by the Queen of IBILE concept by Olayinka Edu, Tobi Odunsi and Nweye Joy, written by Boluwatife Orimolade, Executive Producer, Olayinka Edu, Artistic Director, Tobi Odunsi, Musical Director, Oretimehin Kehinde.

Are you a lagosian? How well do you know your LAGOS? Living in LAGOS goes beyond making ends meet but stamping (leaving) your foot in the sands of LAGOS.

To recapitulate, I AM LAGOS the musical is imparted to explore, propagate, and engage Lagos, her values, and her potentials.

N.B I AM LAGOS THE MUSICAL WILL NO LONGER RUN FOR THREE DAYS DUE TO THE RECENT OUTBREAK OF THE OMICRON VARIANT – CORONA VIRUS, JOINING THE LAGOS STATE GOVERNMENT IN CUBBING IT. I AM LAGOS the musical is now slated for one day: 24th of December, 2021, with two show 3pm and 7pm.

ALL COVID 19 PROTOCOLS WILL BE STRICTLY OBSERVED AT THE VENUE.

Come one, come all to be part of another exhilarating Lagos Experience

I AM LAGOS, leaving my footprint in the sands of the lagoon

Bandits kill man on his way to Zaria