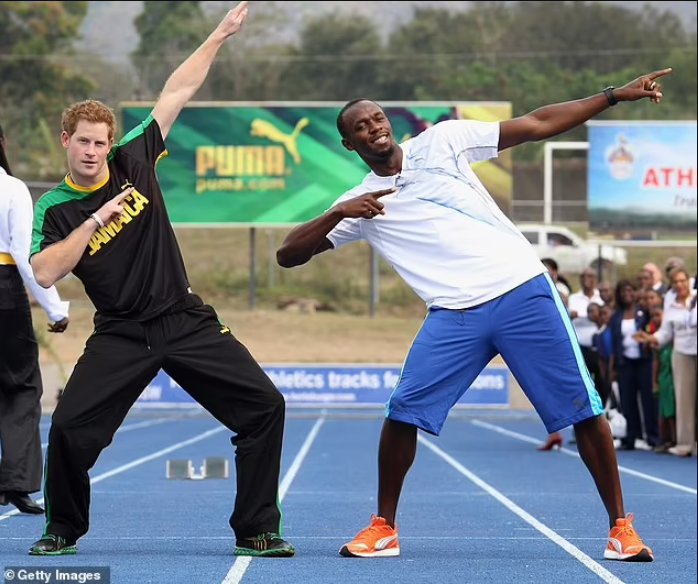 Usain Bolt has claimed his old pal Prince Harry no longer speaks to him after he ‘got really serious, really quickly’ with Meghan Markle.

The Duke of Sussex, 37, and the Olympic legend, 35, became friends when Harry toured Jamaica on a four-day visit on behalf of the Queen in 2012, with Usain even saying he hoped to organise the prince’s stag do in 2017.

However, the sprinter has come to claim that he was ghosted by Prince Harry after he met the Duchess, 40, telling The Sun: ‘I think he got really serious, really quickly. He is about married life and good for it now so has left that life behind now.

‘I haven’t talked to him in a while but I still would like to keep in contact.’

Prince Harry headed to Jamaica in March 2012 to meet the sprinter at the Usain Bolt Track at the University of the West Indies as part of a Diamond Jubilee Tour, representing the Queen.

The pair also posed in the sprinter’s signature lightning bolt style together before Usain presented the royal with his own ‘Harry can Bolt’ T-shirt.

At the time, the pair joked around, and the fastest man in the world even let the prince win when they ran together.

Days after Harry announced his engagement to Meghan in 2017, Usain vowed to organise three stag dos for the royal ahead of their nuptials.

But in the run-up to the wedding, Prince Harry was said to have frozen out some of his ‘old posse’ because Meghan doesn’t want any ‘temptations’ as they prepare to start a family.

He and another one of Harry’s friends, PR guru Astrid Harbord, were said to have been ‘airbrushed out’.