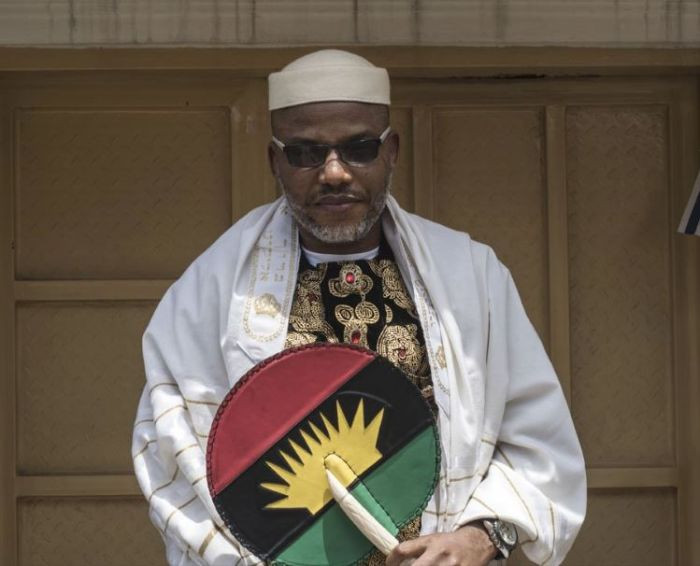 The Indigenous People of Biafra (IPOB) has declared its leader, Nnamdi Kanu a “prisoner of conscience”.

The group’s spokesperson, Emma Powerful in a statement released on Friday December 17, stated that Kanu committed no crime to warrant his arrest.

“In 2015 Nnamdi Kanu was first arrested and subjected to an egregious violation of his fundamental rights. After his miraculous escape from the military invasion of his home in 2017, he was abducted in Kenya and renditioned to Nigeria in June this year.

“Mazi Nnamdi KANU has been in DSS detention in Abuja ever since then. We, therefore, have to inform the world, most civilised countries and the Africa continent that Mazi Nnamdi Kanu is fighting for the freedom and self-determination of his people because under the United Nations Charter, to which Nigeria is a signatory, self-determination is not a crime.

The group which accused the Nigerian government of kidnapping its leader, reiterated that Kanu never jumped bail but “escaped” after being “almost killed during the military invasion of his residence”.

“During the military invasion of his residence, code-named operation Python dance, Mazi Kanu was almost killed save for his miraculous escape.

“In 2021 he was kidnapped by the Nigerian government in Kenya and subjected to extraordinary rendition to Nigeria against his will and all norms and rules of international law.

“In both instances, he committed no offence known to law. He only advocated self-determination for his people and all oppressed peoples in Nigeria.

“He did so peacefully by articulating the decades of oppression, marginalisation, inequality, Apartheid, brutality and genocide to which his people and all oppressed peoples in Nigeria have been subjected.

“And in light of those grievances, he demanded a referendum on self-determination and self-rule for the indigenous peoples of Biafra (IPOB) and all aggrieved groups and lovers of freedom.

“In doing so he bore no malice nor hate against any group. He only demanded self-determination as enshrined in the African Charter and the United Nations charter both of which Nigeria is a signatory.

“In peacefully articulating the grievances of an injured and oppressed people and in seeking self-determination for all such peoples; Nnamdi Kanu broke no law within or outside Nigeria.

“We  use this opportunity to put the world on notice to ongoing extrajudicial detentions, persecution and widespread human rights violations in Nigeria.”

IPOB called on the US, Israel, the African Union and Amnesty International to intervene and ensure the release of its leader.

Being married to Prince Andrew was happiest time in my life