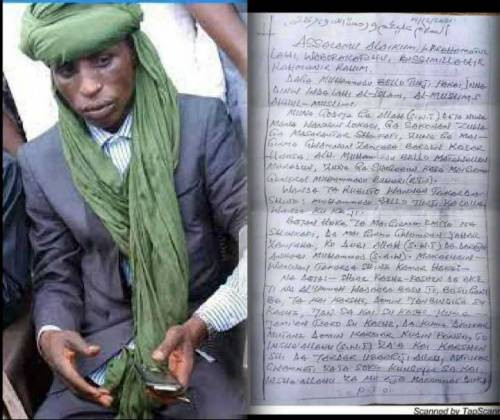 Bandit leader Bello Turji writes Buhari and others, seeks dialogue and reveals only Sheikh Gumi understands and sympathizes with them

Bello Turji, leader of the group of bandits who are reponsible for the attack which claimed the lives of 23 passengers in Sokoto state and other killings in the North-West region, has reportedly written a letter to President Muhammadu Buhari; Zamfara State Governor, Bello Matawalle and the Emir of Shinkafi.

Premium Times reported that the three-page open letter which was written in Hausa language with a salutation in Arabic, has been authenticated by experts.

Bello in the letter said he’s ready to surrender all his arms if the five conditions he listed are met.

These include dissolution of unofficial vigilante groups in the North-west, a meeting with traditional rulers and religious leaders, a stop to the ‘marginalisation’ of Fulanis; honest discussions between bandits, traditional rulers and politicians, and the participation of first-class emirs in a security meeting.

“Unnecessary Killing of people will be over. Because unofficial vigilante members would just see innocent person and kill … We need to be seen as people with equal rights like any other person else. We’re being killed unnecessarily. We’re being relegated to the background. We should be allowed to return to our houses and live normal lives. We also want to have a meeting with our traditional rulers and religious leaders to iron out issues.

“… we’re not fighting the government or trying to form our government. No! We’re just tired of the marginalisation of the Fulanis; especially in the markets. So, if you people need peace to reign, we should do it for the sake of God. And for normalcy to return, we want a situation whereby no one will be cheated.”

In the letter which was signed with the bandit leader’s full name, Muhammadu Bello Turji Kachalla Fakai, it was also stated that Islamic cleric, Ahmed Gumi, first-class emirs and notable Islamic scholars should be invited for a summit with the bandits.

“… especially Sheikh Ahmed Abubakar Gumi; we know him because he came here and preached to us and we’ve witnessed the importance of peace due to his counsel, hence, the need for us to do our best for peace to return to our land.”

The letter which was also published by Daily Trust, reads in full;

“We are grateful to God who has given us this opportunity to bring this message to the Emir of Shinkafi, through the Governor of Zamfara state, Alh Mohammed Bello Matawalle (Baraden Maradun) and to the President Mohammed Buhari.

“This is a letter (originally written in Hausa as seen below) from Mohammed Bello Turji Kachalla, the one we all know about.

“Having said that, I want the Emir of Shinkafi, the governor of Zamfara and the president, to look up to Allah and his Prophet.

“The purpose of this letter is as follows:
1. The killings of people going on which is not being publicised, the killings by bandits, herdsmen, kidnapping for ransom and even by security agents are our making. All these will come to an end by the grace of Allah. The government will have to play its part to ensure that this is achieved. As long as ethnicity and tribalism are eliminated, we need to all remain as one big family and forgive one another as Allah commands.
“2. Your highness, we would like to have a sit down with the traditional rulers in this country and also the religious leaders. If this is done, I Mohammed Bello Turji Kachalla, will make sure to disarm all my men and hand over all our arms to the government of Nigeria. As long as the government promises to take care of us the way it is taking care of the rest of the country and stop the stigmatisation of my people.
“3. Your highness, I want to assure you that we are not in contention with the government of Nigeria and we do not want any other country apart from this, we are not seeking power of any kind, rather the ugly things we Fulanis are facing in this country have pushed us to react the way we do and made us want to defend ourselves to the detriment of the peace of the nation.
“4. Your highness, we are not thieves and we don’t mean to harm anyone. This letter is not borne out of deception and we would not want to be deceived. Everything should be done in transparency for Allah’s sake and for the sake of the peace of our nation. So we can go back to the way we were in the past. We should all be law-abiding and allow the security agents to do their job and punish anyone found wanting. No form of arms would be seen with anyone except in the hands of the security agents as it’s supposed to be.
“5. Your highness, this is our last request. Just as we said earlier, we will like to make sure that all traditional rulers and all our Muslim leaders, most especially Sheikh Ahmad Abubakar Gumi, to be present at this meeting. This is because he is the only one who understands us and he has been paying us visits to sympathize with us. He has been preaching to us and we have seen the effectiveness of his messages in our lives. We only want the peaceful existence of everyone in this country.
“May Allah give us all the strength to keep these promises without fail.
“This letter is from Mohammed Bello Turji Kachalla.”