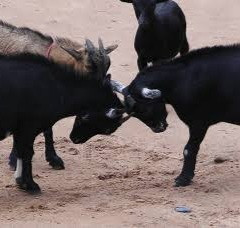 A man in Adamawa State, Musa Usman, has pleaded guilty to stabbing his neighbour, Abubakar Yunusa, to death.

Both men had a misunderstanding over a goat and Musa Usman stabbed Yunusa in his ribs, which led to his death.

“The victim was rushed to the Specialist Hospital Yola, but was confirmed dead the following day by the medical doctor,” the prosecutor said.

One Idris Saidu reported the incident to the police and Musa Usman, who hails from Sangere, a community in Yola South Local Government Area, was arrested.

Musa confessed to the Chief Magistrate Court 1 in Yola that he perpetrated the crime.

The presiding judge, Abdullahi Mohammed Digil, ordered the remand of the defendant until January 11, 2022, as applied for by the prosecutor, Seargent Sawe Nicholas.