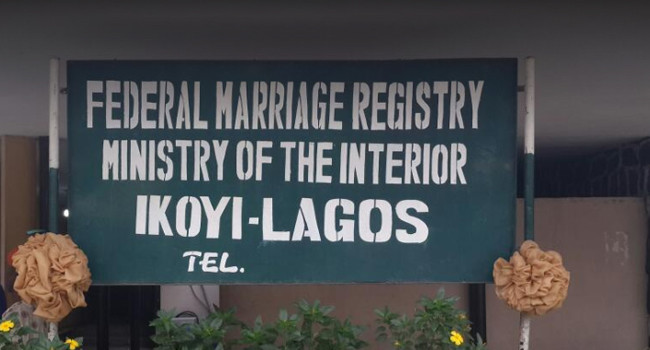 The federal ministry of interior has reiterated that marriages conducted at Ikoyi Registry are constitutional and legal.

Spokesperson of the ministry, Blessing Lere-Adams who released another statement to counter report of a judge ruling that “marriages conducted at federal registries were illegal as local governments are responsible for that aspect of public life”, described it as misleading and false.

“The Permanent Secretary and Principal Registrar of Marriages, Dr. Shuaib Belgore confirmed this statement while fielding questions in his office . Belgore emphatically submitted that the misinformation and totally incorrect news making the rounds recently in the Social media-was incorrect and should be disregarded. He further stated that there should be no cause for apprehension to all intending couples who have planned to be married during this festive period-and at any other time at the Ikoyi Marriage Registry in Lagos or at any other Federal Marriage Registry.

“He stressed that the Federal High Court in three previous decisions had affirmed the powers of the Ministry to conduct statutory marriages, based on the provision of the Constitution, marriage acts and Legal Notices issued by the President and Minister of Interior. He stated that these judgements are valid, subsisting and binding, until set aside by a superior court, which is not the case.

“Dr. Shuaib Belgore therefore wishes to again reassure the general public, especially intending couples that the contraction of all Marriages at the Ikoyi Marriage Registry is constitutional and Valid.

“The Permanent Secretary wishes all prospective couples planning their marriages during this yuletide a pleasant ceremony.”

Until you and Joy apologize for your atrocities, you will never have great children come through you