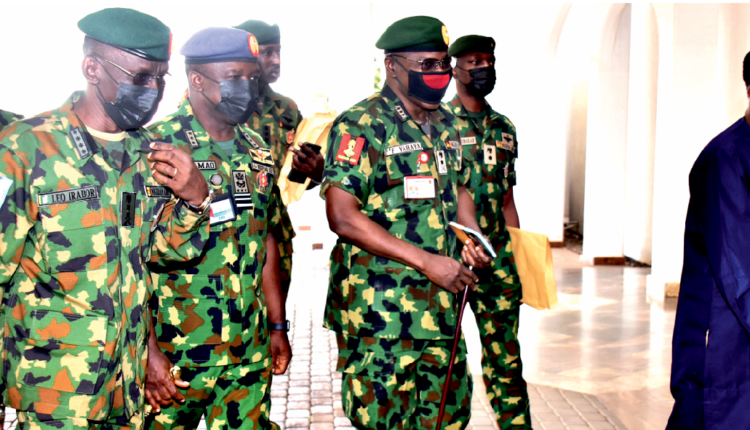 Crush Boko Haram and ISWAP before 2023

President Muhammadu Buhari has asked service chiefs in the country to ensure that the Islamic State of West Africa Province (ISWAP) and Boko Haram are crushed before he leaves office in 2023.

Buhari gave the marching order at an emergency security meeting yesterday December 24, barely 24 hours after the insurgents shot rockets close to the Maiduguri airport shortly before the he arrived the North-East city.

The President who wondered why ISWAP insurgents keep striking from the same corridor unchecked, directed that no inch of Nigerian territory should be ceded to terrorists.

A top source told The Nation that the security meeting was a “frank appraisal session.” He said;

“No one was happy with how the ISWAP insurgents struck on Thursday and took the shine off Mr. President’s visit.

“The President could not understand the recurring assaults from the same corridor or axis.

“We had a similar incident on December 4. And before the President’s visit, a security /intelligence evaluation was done with a caveat that there should be a subsidiary operation to cordon off this axis.

“Yet the insurgents fired rockets from the same axis and targeted the Maiduguri International Airport.

“Although the President did not betray emotions during his visit, he was certainly not happy with the situation of things.

“The President asked the Service Chiefs not to give terrorists, especially the Islamic State of West Africa Province (ISWAP), a breathing space. He directed that no inch of Nigerian territory must be occupied by terrorists.

“He warned against the reversal of the gains the military has made. He also sought a more proactive campaign to rout the insurgents, whether Boko Haram or ISWAP.

“He said his administration is prepared to win the war against insurgency.”

Another source also told the publication that top Army Generals were deployed yesterday to Borno State to “review the situation and boost the war against the insurgents.”

“Many Army Generals arrived in Borno State on Friday to review the situation and improve on the operational strategies.”

“Tacha gifted herself the ₦10m for her birthday, it wasn’t from her fans” — Actress, Esther Nwachukwu reveals