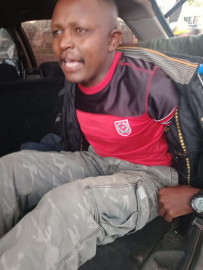 A rogue police officer who went into hiding after killing his superior has been arrested by detectives at a bar in Nakuru City, Kenya.

The suspect, Corporal Joseph Muthunga, shot and killed Senior Sergeant Ayub Onyango Polo, on Christmas Day, after he reprimanded him for reporting to work late and drunk.

Muthunga is said to have shot Polo five times, killing him instantly, before fleeing the scene.

According to Kiraguri, the suspect’s phone gave away his location after being traced by detectives.

Kiraguri says that the suspect will be transferred to Naivasha where he is expected to show detectives where he stashed his state issued G3 rifle which he used to commit the murder.