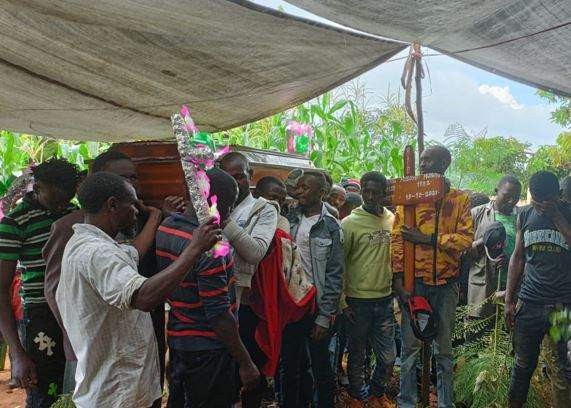 Drama as gravediggers boycott food at funeral, carry casket to bar where the deceased allegedly drank alcohol before dying

A dramatic scene was recorded at a funeral ceremony at Muthuari village in Runyenjes constituency, Embu county of Kenya, as some gravediggers boycotted food prepared for them, grabbed the casket and carried it to a bar where the deceased is said to have taken alcohol before dying.

The youths who boycotted the food, claimed that the deceased, Dennis Mwaniki Mugambi instructed them not to eat food at his funeral.

The angry youths reportedly scattered the food, grabbed the casket and carried it to Umoja Bar where the deceased is alleged to have taken alcohol before dying.

K24TV reported that the clergymen invited to lead the burial ceremony were left in shock and with no body to bury for hours.

Outside the bar, the unruly youths who were lifting placards and tree branches alleged that the owner was practising witchcraft. The bar owner is said to have scampered for safety with the youths calling on authorities to arrest him over the allegations.

Mwaniki is said to have been on a drinking spree with his friends before falling sick and eventually dying. He was taken to Runyenjes Level 4 hospital where he succumbed while undergoing treatment.

After the melee, the youths returned the coffin and the burial went on hours later. Speaking at the burial, Area Assistant Chief Cosmas Karugano ordered the closure of the bar and urged the youths to be calm promising to ensure the matter is fully investigated.

“Let’s avoid drinking alcohol carelessly. The OCS has ordered us to close the bar from now and we have done that. We will now continue with investigations and I want the locals here to report to me if the bar is opened again.”