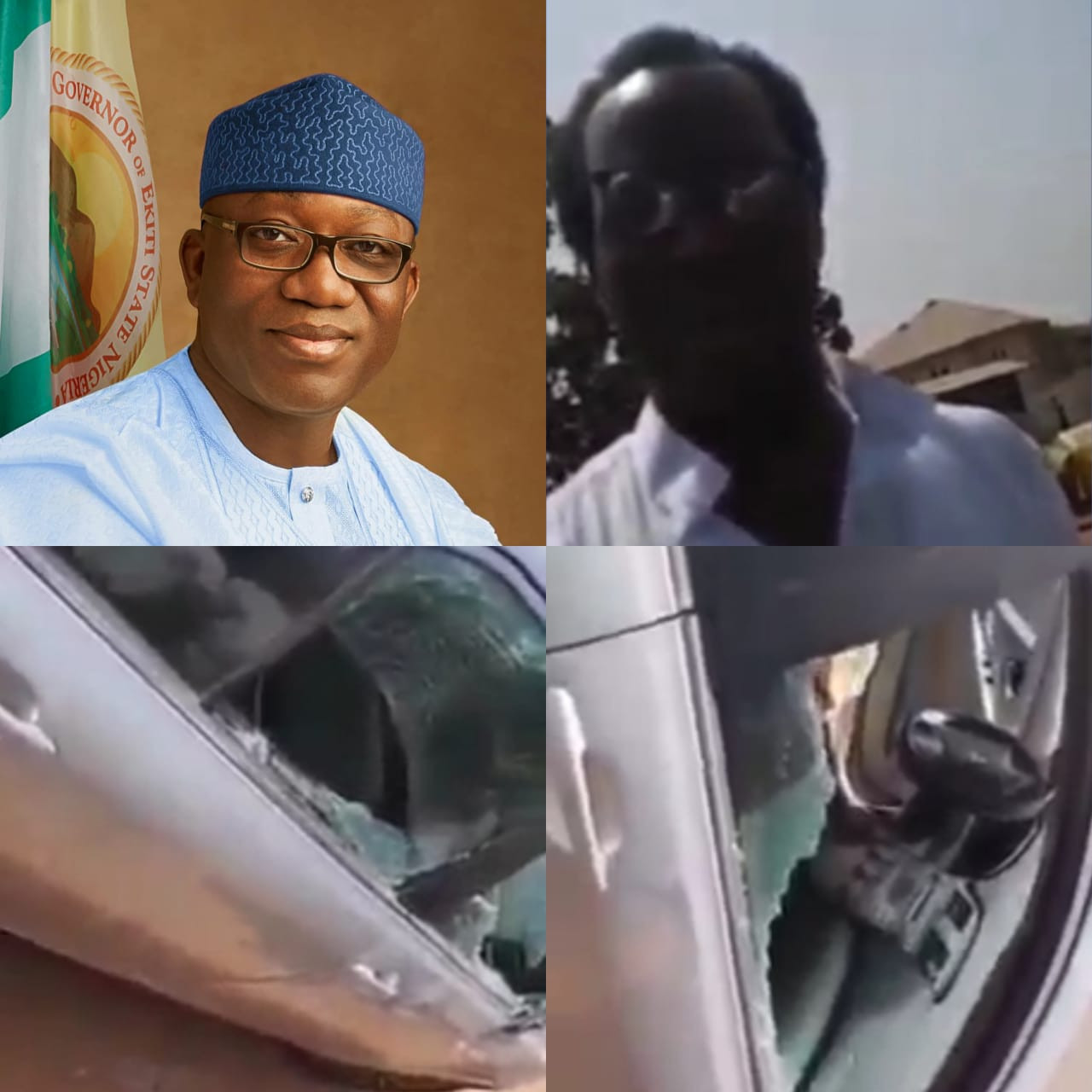 The Ekiti state government has dismissed claims made by a motorist, Dapo Oshituyi, who in a viral video claimed that his car was vandalized by security officers in the convoy of Ekiti State Governor, Kayode Fayemi, a week ago along the Akure-Ekiti road.

The Chief Press Secretary to the governor, Mr. Yinka Oyebode, in a statement titled, “Re: Alleged assault on motorist: Our position”, said a preliminary investigation by the state government reveals that ”on the said date, Mr. Oshituyi who had been driving recklessly from behind, made to overtake the governor’s convoy despite repeated warnings by the security operatives. He ran into the governor’s convoy and even destroyed one of the cars’.

”The Government of Ekiti State is bringing an update on the subject following our pledge to investigate the circumstances surrounding the alleged brutalisation of a motorist Mr. Dayo Oshituyi, in Akure, Ondo State a few days ago.

Members of the public are invited to note the following, which are the outcomes of our preliminary investigation:

1. On the said date, Mr. Oshituyi who had been driving recklessly from behind, made to overtake the Governor’s convoy despite repeated warnings by the security operatives.

2. In the process of dangerously overtaking the convoy of vehicles, he was faced with an oncoming truck from the opposite direction of the road which forced him to swerve dangerously into the convoy – an action which caused a minor accident that affected one of the vehicles usually reserved for the Governor. Mr. Oshituyi further sped off into another direction breaching public safety and almost causing another accident along the route.

3. In consideration of the security situation in the country, and the need for appropriate tactical threat assessment to clarify if the incident was simply a case of reckless driving and not an attempt on the convoy, a detachment of security operatives pursued the fleeing driver while the convoy continued its journey.

4. At the point of being apprehended when the security operatives caught up with him, Mr. Oshituyi refused to alight from the vehicle and chose instead to create a scene. He was let go because of the pleadings of passers-by and people living in the area, who can corroborate our position that he was not assaulted in anyway or form.

5. We must reiterate that Mr. Oshitutyi’s claim that he was brutalised is just as untrue as his claim that the Governor was present during the altercation between him and the security operatives, which resulted from his indiscretions.

6. The development was subsequently reported at the Okuta Elerinla Police Divisional Headquarters, Akure, Ondo State capital. We further inform members of the public that the Ondo State Police Command, in whose jurisdiction the incident took place, is presently investigating the matter. The Governor of Ekiti State, Dr. Kayode Fayemi has a sustained interest in the outcome of the investigations and has urged the police to handle the matter professionally and ensure fairness to all parties concerned.

7. As a responsible government that believes in the principles of the rule of law and fairness, further action on the matter is on hold pending the outcome of police investigations, which would guide our next steps. We assure members of the public that the Government of Ekiti State would not hesitate to recommend appropriate punitive measures against any of our officials who might be indicted, in line with the provisions of extant laws.

8. We are pleased that consistent with his character, the Governor of Ekiti State, Dr. Kayode Fayemi is well known for the civil and decorous way security details attached to him conduct themselves in the course of duty, which is why attempts by some detractors to use this development to cause disaffection against his person and office have failed. We use this opportunity to affirm our commitment to the protection of the fundamental rights of every citizen and assure that we would not do anything to jeopardise such rights.

9. Regardless of the circumstances, we are interested in the well being of Mr. Oshituyi following the incident and invite him to maintain open lines of communication with the Governor’s Office through the undersigned in this regard, and towards the ends of justice and clarity about the facts of the matter.”

‘This is how she found out about Alex’s lifestyle’ Reactions as Alex Ekubo’s ex, Fancy and IK Ogbonna’s ex-wife, Sonia, link up

Reality star, JMK calls out man harassing her with his d*ck photos and calls