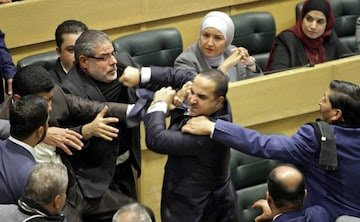 Several lawmakers in Amman, Jordan traded punches in a brawl in Jordan’s parliament on Tuesday, December 28 that was shown live on national Tv.

The fight started after a verbal row escalated when the assembly speaker called on a deputy to leave, witnesses said to Al Jazeera.

Live footage on the country’s national television showed several MP’s punching each other while one deputy fell to the ground as others shouted in chaotic scenes that lasted a few minutes.

No one was injured in the fight.

Reports say the fight began over the refusal of a member to apologise over unwarranted remarks during a session to debate proposed amendments to the constitution.

“There was a verbal shouting match that turned into a fist fighting by several deputies. The behavior is unacceptable to our people and harms our country’s reputation,” said Khalil Atiyeh, a member of parliament who witnessed the session.

In a clip that has gone viral in Jordan, MPs start fighting while discussing constitutional amendments to a chapter in the constitution guaranteeing equal rights of all citizens.

If you die while fighting bandits, you’re a martyr – Katsina governor, Aminu Masari, urges residents to defend themselves