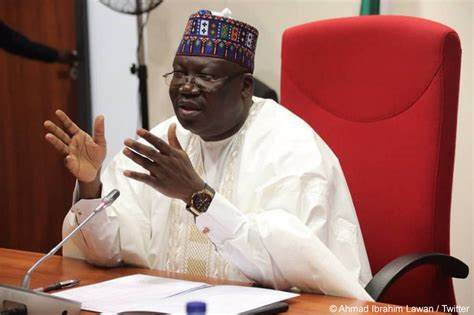 Senate President Ahmad Lawan has said that the country is benefiting from the cordial relationship between the executive and the legislative arm of government.

Lawan made the claim while addressing journalists after President Muhammadu Buhari signed the 2022 appropriation into law on Friday December 31.

He also said the ability of the federal government to have the budget passed and signed before the end of the year, has made so many states to also work towards achieving that.

“The secret is cooperation, partnership, synergy, and that understanding and mutual respect.

“Nigeria is benefiting from that kind of relationship. So that is what, in my judgment and opinion works for us, to be passing the budget at the time, that will always feel is the appropriate time before the end of the year.

“Mr. President, congratulations to him for signing the 2022 appropriation bill today, even though today is the last day of the year. But we have achieved that very significant important date of signing before the end of the year.

“The reality is what I have observed, the ability of the federal government to have his budget passed and signed before the end of the year, has made so many states to also work towards achieving that.”

The senate president also said the issue raised by the president on how the budget was appropriated, shouldn’t cause any controversy.

“In fact, I hold the opinion that they should have contributed about a trillion, at least not N500 billion or so.”

Put Abia state in your prayers, we need redemption