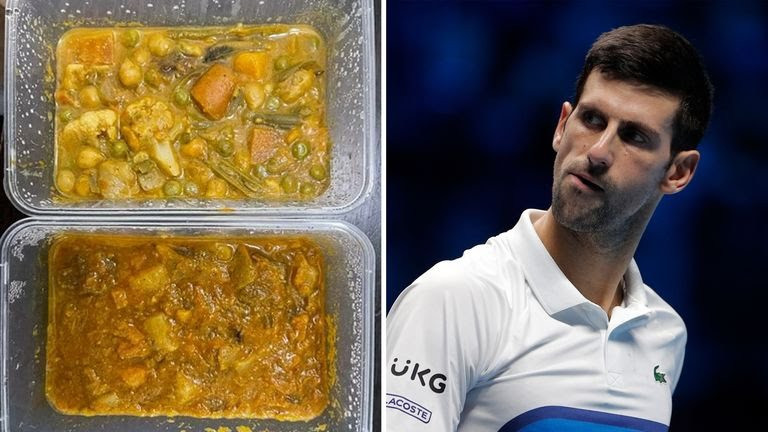 World tennis number one, Novak Djokovic’s request for access to a personal chef and a tennis court while in an immigration detention facility has been rejected by Australian immigration officials as he faces deportation after his visa was cancelled.

Djokovic is currently embroiled in a row over whether he is exempt from the country’s strict COVID vaccination rules, as his lawyers are battling to ensure the Serb is able to defend his Australian open title.

Also alleged photos of the food that is given to refugees in the hotel has leaked online with some saying the food contains mold and maggots.

Saturday, January 8 will make it a third day Djokovic will be staying in the Melbourne immigration detention facility – a couple of miles from the luxury hotels where most Australian Open players are staying.

Lawyers representing the 34-year-old say he tested positive for COVID-19 on 16 December and he had a valid visa and medical exemption from the organiser of the Australian Open.

His lawyers also requested alternative accommodation so he could train for the tournament which starts on 17 January but that has been denied too.

Djokovic, who has expressed scepticism about coronavirus vaccines in the past, wrote on Instagram on Friday: “Thank you to the people around the world for your continuous support. I can feel it and it is greatly appreciated.”

Hossein Latifi, a man in the same hotel as Djokovic told the Reuters news agency: “We are stuck in our room. There is no fresh air. We don’t have any place for training. There is no gym here. It’s very hard.”

The 32-year-old, who is originally from Iran, added: “We are refugees, we are innocent people – we’ve not committed any crime. They just keep me like hostage here.”

As a Benin woman I didn’t find Bobrisky’s comment funny too, but please forgive