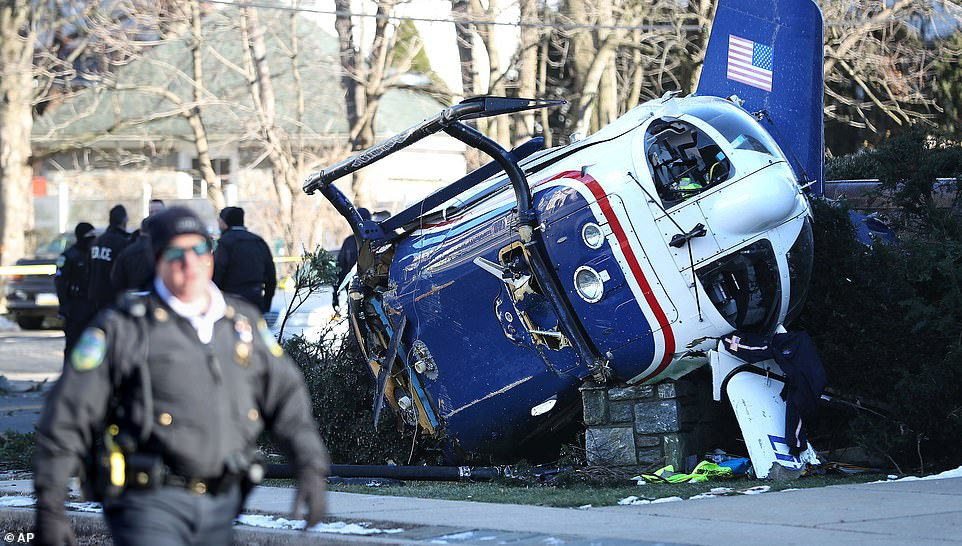 The Passengers and pilot of a medical helicopter transporting an infant to a children’s hospital crashed outside a church Wednesday, January 12, but no body died.

The chopper crashed into Drexel Hill United Methodist Church on Burmont Road, in Drexel Hill, Philadelphia, US around 1pm Tuesday, following 911 reports of a helicopter in distress in the area.

Miraculously, no one on the ground was injured by the helicopter, and no one in the chopper died despite it landing in a residential neighborhood, about a block away from local eateries and about half a mile from a school.

The passengers and the pilot all suffered non-life threatening injures and one occupant could be seen crawling out of the wreckage.

Upper Darby Fire Chief Derrick Sawyer called it a ‘miraculous landing’ and said the community was ‘truly blessed’ by the outcome. Even the church it landed on didn’t have much damage

A local resident who was out running errands with his family revealed how he felt when the helicopter appeared to drop directly above them.

‘I was actually frozen for a second when that happened because I was just looking at a helicopter,” Joshua James told CBS Philadelphia.

‘It’s no way to explain it. It almost feels like something from Game of Thrones, you see a dragon coming at your car because it was literally in the sky, a huge object coming toward you. It was insane.’

A witness, Jarrell Saunders, who works at a nearby apartment complex, said;

Moments later, he watched as the chopper landed on the road and slid into the church. As smoke began emerging from the downed aircraft, its occupants began leaping out, he said.

‘I’m telling my grandkids about this one,’ he told ABC news