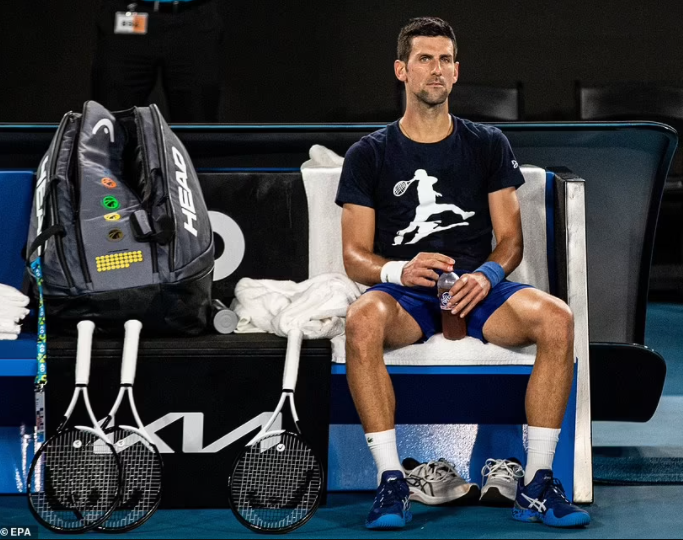 Tennis star, Novak Djokovic has been sent back to a notorious immigration detention hotel amid his ongoing visa battle with the Australian government.

Australia’s conservative government is trying to have him deported back to his country, calling the tennis star a threat to public order who could spark ‘civil unrest’ after he was granted an exemption to get vaccinated.

But the tennis world no. 1 is fighting back, with a new federal court appeal scheduled for Sunday, the day before the Australian Open – and Djokovic’s defence of his title begin.

The Serbian ace is back at a notorious Melbourne immigration detention facility after he was freed for a few days following his first successful court appeal against the original decision to cancel his visa on January 5.

A motorcade was spotted moving from his lawyers’ offices, where he had been kept under guard for most of Saturday, to the former Park Hotel facility.

In court filings, Australia has cast him as a talisman for anti-vaxxers and a catalyst for potential ‘civil unrest’, who must be removed in the public interest.

Not only could Djokovic encourage people to flout health rules, Hawke said, but his presence could lead to ‘civil unrest’.

So with just two days before the Australian Open begins, the defending nine-time champion is again focused on law courts rather than centre court.

The visa cancellation means Djokovic would be barred from obtaining a new Australian visa for three years, except under exceptional circumstances, ruling him out of one of the four Grand Slam tournaments during that time.

He is currently tied with Roger Federer and Rafael Nadal with 20 Grand Slam titles each.

I hope God will listen to our prayers on insecurity