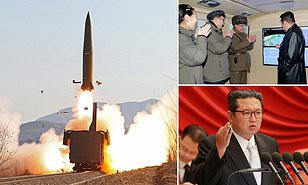 The secretive state of North Korea has fired two ballistic missiles into the sea, its fourth weapons launch this month.

According to South Korea´s military, the apparent goal of the test was to demonstrate its military might.

According to South Korea´s Joint Chiefs of Staff the North likely fired two short-range ballistic missiles from an area in Sunan, the location of Pyongyang´s international airport.

The U.S. Indo-Pacific Command said the missiles did not pose an immediate threat to U.S. personnel or territory, or to its allies, but highlighted the destabilizing impact of the North´s ‘illicit’ weapons program.

North Korea had conducted a pair of flight tests of a purported hypersonic missile on January 5 and January 11 and also test-fired ballistic missiles from a train on Friday .

In recent months, the repressive regime led by Kim Jong Un has been ramping up tests of new missiles designed to overwhelm missile defenses in the region.

A U.S.-led diplomatic push aimed at convincing North Korea to abandon its nuclear weapons program collapsed in 2019 after the Trump administration rejected the North´s demands for major sanctions relief in exchange for a partial surrender of its nuclear capabilities.

So Kim Jong Un is going back to his  technique of pressuring its neighbors Japan, South Korea and the U.S. with missile launches and outrageous threats before offering negotiations meant to extract concessions.

At the beginning of 2022 Kim pledged to further expand his nuclear arsenal which he sees as his strongest guarantee of survival.