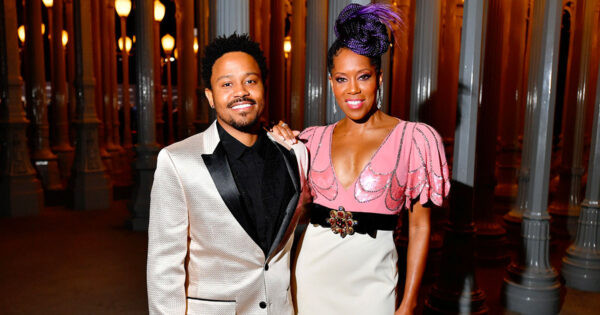 ‘Our family is devastated at the deepest level’

The award-winning actress, 51, confirmed the tragic news to PEOPLE on Friday, January 21, with a statement reading: ‘Our family is devastated at the deepest level by the loss of Ian. He is such a bright light who cared so deeply about the happiness of others…

‘Our family asks for respectful consideration during this private time. Thank you.’

Ian, who celebrated his 26th birthday on Wednesday, shared her son with her record producer ex-husband Ian Alexander Sr. He is her only child.

King shared a close bond with her son, an artist, and DJ, who often accompanied her to events and called her ‘super mom’ at the 2019 Golden Globes.

‘She doesn’t really let bad workdays or anything come back and ruin the time that we have. It’s really awesome to have a mother who I can enjoy spending time with.’

The If Beale Street Could Talk actress separated from Ian’s father in 2007, after nine years of marriage.

In 2011, Regina spoke with Essence and revealed how much she adored Ian.

She said: ‘I get emotional because my son is an amazing young man, and it took me to be a mother for me to realize how incredible of a woman she (my mother) is.’

‘But when you experience it, it is the most fulfilling ever. So, that is the greatest part about me. Being a mom to Ian.’