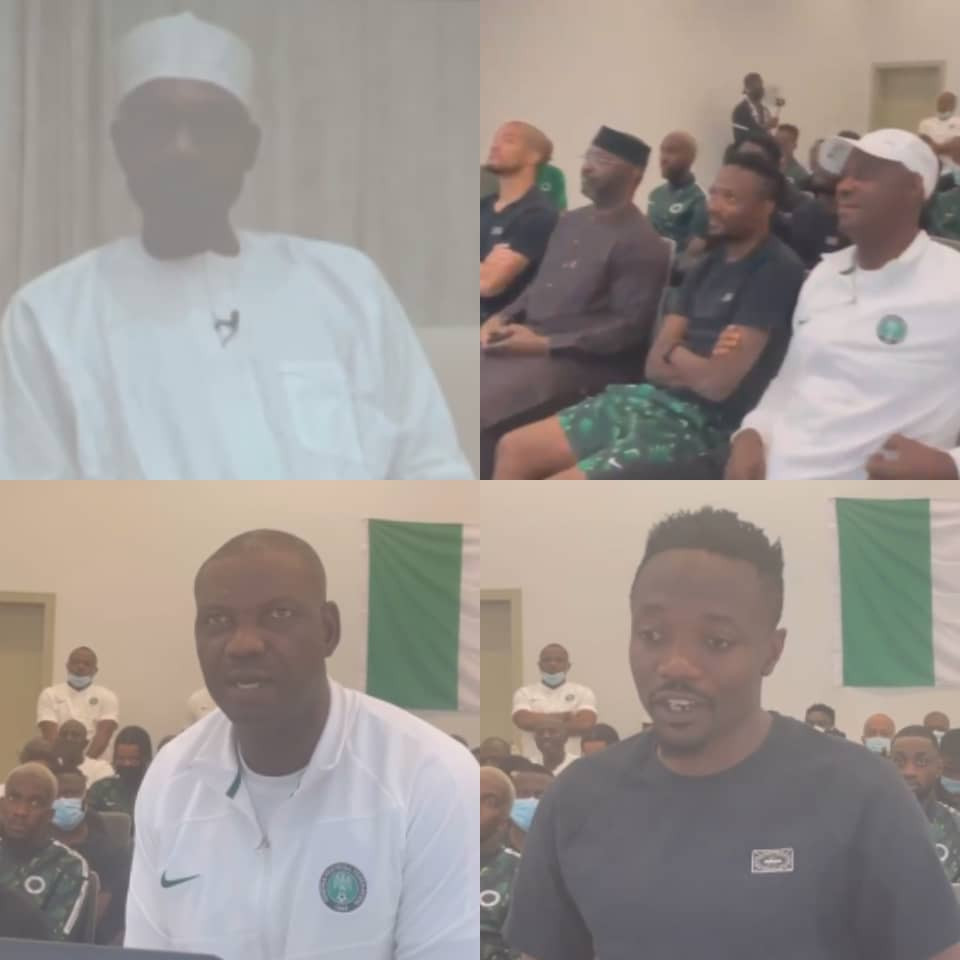 President Buhari on Sunday morning, January 23, gave a pep talk to the Super Eagles, ahead of their second-round match against Tunisia tonight in the ongoing African Cup of Nations (AFCON) tournament.

Mentioning two of the players, Kelechi Iheanacho and Moses Simon, by name, President Buhari urged the Super Eagles to continue making Nigerians happy, not only by winning the second round match, but to eventually lift the trophy.

“You’ve been doing Nigeria proud. You’ve been winning. Please keep on winning. The Federal Government is supporting you, and I say thank you to all the technical crew and the players.. Please keep doing the country proud.”

The President applauded the good work being done by the Hon Minister of Sports and Youth Development, Sunday Dare, saying the country appreciates it.

Responding, Coach Eguavoen said; “We are so excited that His Excellency, President Buhari, has come to speak with us this morning. On behalf of the players and the technical crew, I want to say thank you very much sir.

“The group stage has passed, and your speaking to us is a morale booster. Thank you for your support, Mr President, we also thank the Hon. Minister, and the NFF President. We are so privileged, and want to promise that you should just relax, we’ll come out victorious. We won’t let the nation down.”

Ambassador Olonisakin said the over 4 million Nigerians living in Cameroon have been giving robust support to the Super Eagles since they arrived Garoua, Cameroon, on January 5, “and they will continue to do so.”

Ahmed Musa, on behalf of the players, appreciated Mr President, noting that it is not easy to speak with the leader of a country, and they count themselves privileged.

“We will make Nigeria proud, now that we have the blessings of the father of the nation,” Musa said.

NFF President, Asaju Pinnick described the video conference as “a priceless privilege,” and thanked President Buhari and the nation at large for their prayers and support.

He said under the current dispensation, Nigeria has won the Under 17 football tournament twice, “and we want to win the African Cup of Nations too.”

Watch a video of him speaking to the players below

Not everyone dey do ashawo for Libya