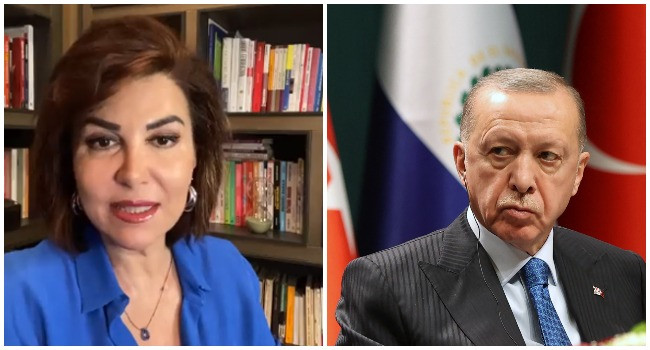 Police detained her in the early hours of Saturday morning, and a court ordered her to remain in jail pending a trial.

“We hope Turkey can return to rule of law soon.”

The alleged insult was in the form of a palace-related proverb that Kabas expressed both on an opposition television channel and on her Twitter account, drawing condemnation from government officials.

Kabas did not name Erdogan directly. However, the authorities object to a proverb that she used during a show on Tele1 television and later tweeted.

“When the ox comes to the palace, he does not become a king,” Kabas said. “But the palace becomes a barn.”

Erdogan spokesperson Fahrettin Altun called Kabas “immoral” and “irresponsible.” “The honor of the presidency’s office is the honor of our country. … I condemn the vulgar insults made against our president and his office,” he wrote.

Turkey’s justice minister, Abdulhamit Gul, wrote on Twitter that Kabas will “get what she deserves” for her “unlawful” remarks.

“Her detention overnight at 2 a.m. because of a proverb is unacceptable.

“This stance is an attempt to intimidate journalists, the media and society.”

Kabas had previously been charged after she posted criticism of a government-appointed judge who dropped a corruption probe against Erdogan and other politicians. She was later released.

Police officer dies while having s3x at lodging