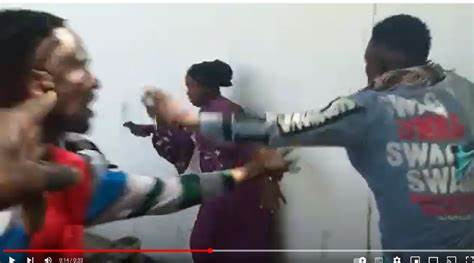 Three men arrested for assaulting a lady in Borno

Three men have been arrested in Borno state in connection to the physical assault of a lady as captured in a viral video.

The victim has been identified as Fadila Abdulrahman, a 23-year-old resident of the Customs area, Maiduguri Metropolitan Council.

In the viral video, she was seen being assaulted by at least four youths. They were reportedly coercing her to renounce her Facebook post, which according to them embarrassed their benefactor, a federal lawmaker Ahmed Satomi.

“I was in my shop when they just came and said they were sent by their boss and they can do anything they want.

“They can even kill me so when they finished hitting me they left and said they’ll come back and beat me. I didn’t do anything to them, it is politics and everyone is entitled to their opinion; everyone can do what they please and no one can force you to like or make a comment.

“I am not a politician I am just a media influencer. I used to have links with him (Satomi) but not anymore.

“I did a write-up which they asked me to delete but I didn’t. It is my opinion and I didn’t mention anybody’s name. But the boys have been intimidating me since I left that camp. I can’t tell if he sent them to me but they said he sent them, they said Saadu Nakande sent them. I am not okay, I feel sick. I don’t want anything at this point but justice, the security agents should just do their jobs.”

Borno State Police Commissioner, Abdu Umar paraded the suspects before journalists on Monday January 24, and further disclosed that two others are still at large. Those arrested in connection with the offence have been identified as Nasir Abubakar, Ali Dungus Shettima, Saadu Suleiman.

“The hoodlums, supporters of Ahmed Satomi a member representing Jere federal constituency alleged that they were engaged by one Suleiman and Manu Nakande. The victim Fadila was attacked and subsequently, her restaurant was destroyed and her mobile set, value yet unknown were carted away, the purpose being that she circulated in social media an image and text undermining the integrity of their master, the member representing Jere as alleged.

“Borno is gaining peace and we will not allow miscreants to infringe on the fundamental human rights of the people and we will prosecute those involved.”

Ahmed Satomi, the house of representatives member on whose behalf the hoodlums assaulted Fadila, has distanced himself from the incident.