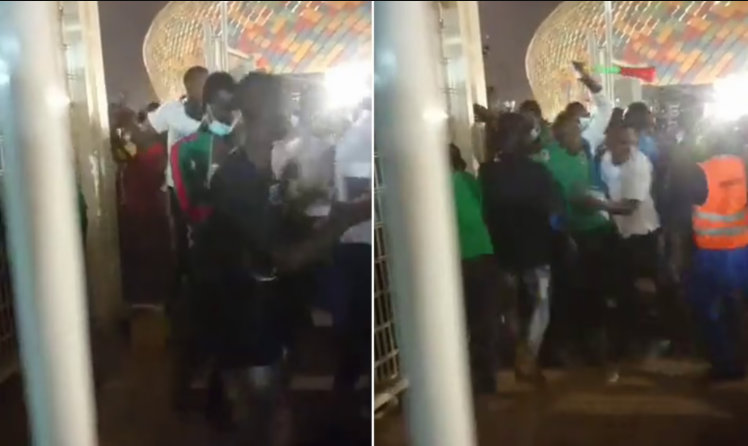 A 6-year-old girl has been confirmed among the eight people that were killed in what has been described as a stampede outside a stadium in Cameroon ahead of an Africa Cup of Nations match.

About 50 were injured with multiple others hospitalised after fans broke through gates at the Olembe Stadium in the Cameroon capital of Yaounde ahead of the country’s match against Comoros on Monday evening.

There were reports of a crush as people made their way into the stadium and news outlet LSI Africa reported that those injured were transported to the nearby Messassi Hospital.

The hospital quickly became overwhelmed and said it could not handle all the injured people, and four more hospitals had to be drafted in to help.

A baby was also reportedly trampled by the crowd – the ministry said it was in a ‘medically stable’ condition after being ‘immediately extracted’.

According to a document posted to Twitter detailing the fatalities shared by reporters, the youngest victim of the stampede was a six-year-old girl.

Cameroonian President Paul Biya ordered an investigation into the tragedy, and added that there could be more casualties, saying: ‘we are not in position to give you the total number of casualties.’

Some 38 people were injured in the crush, including two people with multiple injures and two more with serious head wounds, the ministry said.

‘Some of the injured are in desperate condition,’ said Olinga Prudence, a nurse. ‘We will have to evacuate them to a specialised hospital.’

The health ministry report also said the victims’ journey to hospital by ambulance was disrupted, as ‘heavy road traffic slowed [them] down’.

A witness said the stampede at the south entrance of the stadium happened because supporters were directed by security officials toward an entrance gate that was locked.

‘When the security guys finally began opening the gates, with all the anxiety and after having been locked out … people pushed the security guys away and forced themselves inside,’ said the witness, Marie Asongafack.

‘That’s where it all began … By the time I found myself in front, there were people on the ground being trampled on.’

‘I saw a child less than 10 years old, lifeless. Guys were trying to revive him.’

Officials said around 50,000 people had tried to attend the match.