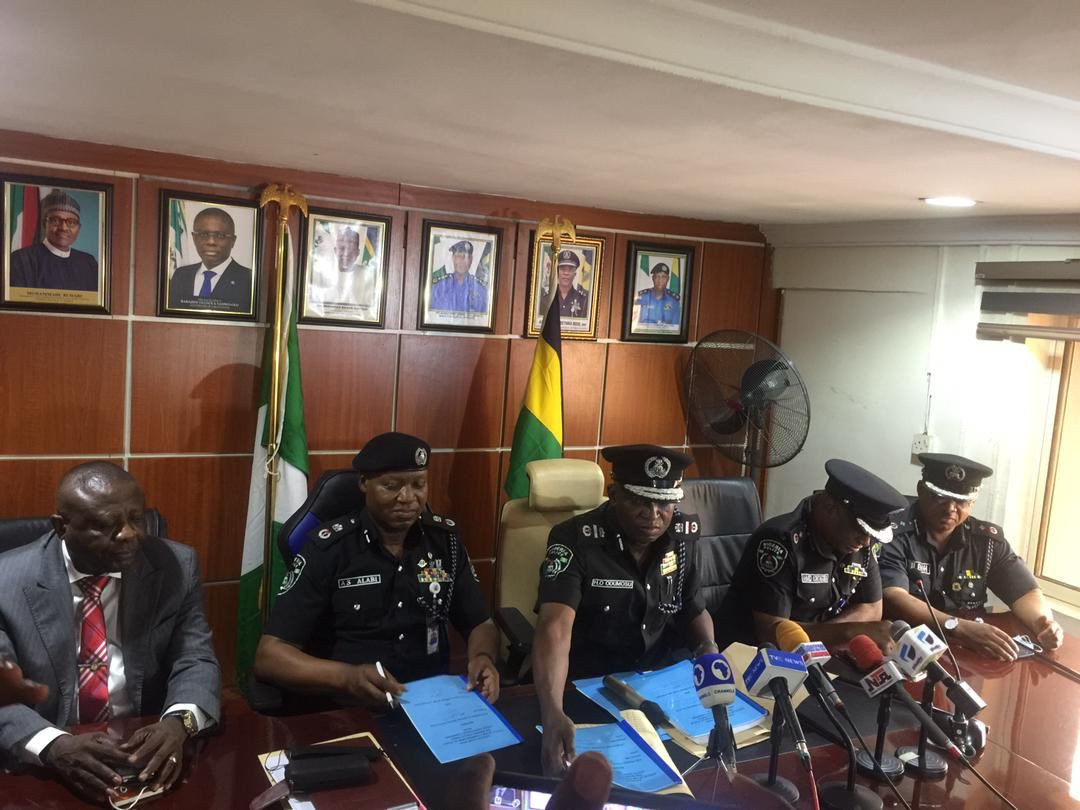 ”There will be respect for fundamental humanrights’- new Lagos Commissioner of Police, Abiodun Alabi, pomises as AIG Hakeem Odumosu bows out

At a ceremony that took place on Monday, January 24, Alabi promised to increase police presence in all parts of the state.

The new Police boss, while speaking with newsmen, shortly after the handing over ceremony said;

“There will be respect for fundamental Human Rights I will ensure that no breach of Human Rights will be tolerated under my command and watch. Although Lagos State is undoubtedly a familiar turf for me having served in the state for many years in different capacities, nevertheless, it has become necessary to bring to the fore my template and policing vision.

We will also ensure that our men’s conduct while discharging their duties must be in conformity with our professional ethics especially with issues of corruption and extra Judicial killing and act of incivility to members of the public.”

“We will strive to build confidence and trust in members of the public particularly with state actors and non-state actors through intelligence-led community policing.

Area commanders and Divisional Police Officers will be encouraged to meet regularly with non state actors to ensure common problems confronting their various areas of responsibilities are collectively addressed. ”

“I will not be allergic to constructive criticism but will see it as an information to rejig our security architecture for our policing strategy. I also want to most sincerely commend the relentless efforts of the outgoing Commissioner of Police, Assistant Inspector of General, AIG Hakeem Odumosu whose operational dexterity and administrative acumen culminated in the security serenity enjoyed in Lagos State today.”

As part of his parting words, the outgoing police boss in the state, Hakeem Odumosu, urged Lagosians to support the new police boss.

CP Abiodun Alabi is an alumnus of the prestigious University of Lagos, Akoka where he bagged a Bachelor of Science degree in Sociology. He also holds a Master’s degree from the Obafemi Awolowo University, Ile-Ife, Osun State.

CP Alabi is a fellow of the Nigeria Institute of Management. He is also a member of the International Association of Chiefs of Police, New York, USA, and Fellow of the National Defence College (fdc).

The new Commissioner of Police has carved a niche for himself as a highly disciplined, courageous crime fighter, professional and thorough-bread police officer with knack for intelligence, investigations, administration and operations. He is expected to bring his wealth of experience to bear on policing in Lagos State. The new Commissioner of Police promises Lagosians robust policing through intelligence gathering, inter-agency collaboration, public partnership and more importantly, respect for fundamental human rights of all citizens.

Viral Video: “Because you’ve seen big nyash” – Nigerian lady fumes at guys who came to patronize her market but got distracted after seeing her backside (Video)