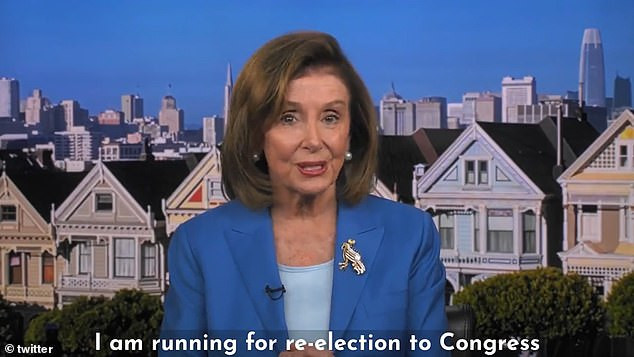 ‘Democracy is at stake’ – US House Speaker, Nancy Pelosi, 81, announces she’ll be running for a 19th term in congress

US House Speaker, Nancy Pelosi has announced she would be seeking another term in the House – her 19th term, shunning retirement talks.

The 81-year-old Democratic leader  cited January 6 Capitol riot and the ‘state-by-state assault on voting rights’ as her reasons for refusing to retire and said ‘nothing less is at stake than our democracy’.

‘While we have made progress, much more needs to be done to improve people’s lives. Our democracy is at risk because of assaults on the truth, the assault on the U.S. Capitol and the state-by-state assault on voting rights,’ Pelosi said in a video message posted on her social media feeds.

‘This election is crucial,’ she continued. ‘But as we say, we don’t agonize, we organize, and that is why I’m running for re-election to Congress and respectfully seek your support,’ Pelosi added.

Pelosi didn’t pledge in her video that she would serve a full term – nor did she say anything about maintaining her leadership position.

‘As you hear me say, “when you’re in the arena, you have to be able to take a punch or throw a punch” – for the children,’ she added.

Pelosi has held the speaker’s position for two stints during her 35-year career in the House.

She made history as the first female speaker in U.S. history after Democrats won the House in 2006.