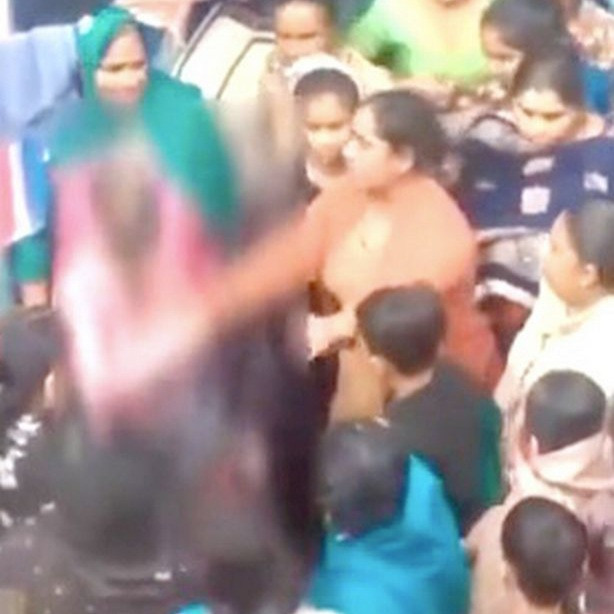 A gang-rape victim was paraded through the streets of Dehli, India, where she was beaten and shamed by a huge crowd after her assault.

The mother-of-one was filmed being publicly shamed for getting raped.

Women were among those in the crowd. They joined to shout at and hit the rape victim.

The 20-year-old woman was gang-raped by illegal liquor sellers on Wednesday, January 26, in the Shahdara area of East Dehli.

After the gang-rape incident, her face was blackened and her hair was cut off.

She was then forced to wear a “garland of slippers” as she was dragged through the street.

The footage shows members of the crowd yelling as they reach out to hit her over the head. She struggles to move away as an older woman tries to hold her still for the lashings.

Sharing the footage on Twitter, Maliwal in Hindi tweeted: “In the Kasturba Nagar area (in Shahdara), a 20-year-old woman was gang-raped by illegal liquor sellers.

“She was made to wear a garland of shoes. Her face was blackened and she was paraded through the area.

“Most unfortunate incident. I am writing to Delhi Police to provide security to the woman and her family and take strong action against the accused.”

The victim is said to be in stable condition as she is being treated in hospital.

20 year old girl gang raped in Kasturba Nagar, Delhi by illegal liquor sellers. Made her bald head and wore a garland of shoes & turned her face black. Accused persons yet to be arrested#DelhiHorror
pic.twitter.com/SD99L7DuQf

Remain lonely until your mind and spirit is ready

Afghans now selling their Kidneys to survive under Taliban rule