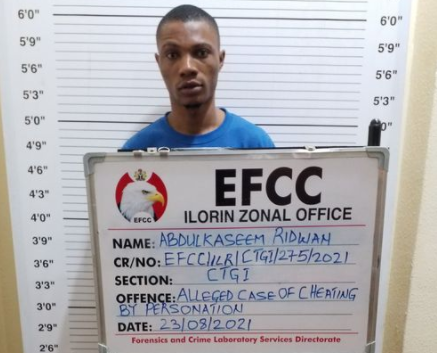 The Ilorin Zonal Command of the Economic and Financial Crimes Commission, EFCC, on Monday, January 31, 2022, secured the conviction of a 25-year-old phone repairer, Abdulkazeem Ridwan, for offenses bordering on cybercrime and possession of fraudulent funds.

A statement released by EFCC spokesperson, Wilson Uwujaren, states that Ridwan, who hails from Surulere Local Government Area, Ogbomoso, Oyo state, was prosecuted on a two-count charge before Justice Adenike Akinpelu of the Kwara State High Court sitting in Ilorin.

Count 2 of the charge reads:

“That you, ABDULKAZEEM RIDWAN, sometime between March 2021 and August 2021 at Ilorin within the Judicial Division of the Kwara State High Court, did knowingly had under your control, the gross sum of N232,000 (Two Hundred and Thirty Two Thousand Naira Only) which is reasonably suspected to have been unlawfully obtained and paid into your United Bank for Africa account number 2181380452 with name Ridwan Randy Abdulkazeem and thereby committed an offence contrary to and punishable under Section 319 (a) of the Penal Code’’

The defendant pleaded guilty to the charge.

Following his plea, counsel to the EFCC, Andrew Akoja, reviewed the facts of the case through one Ali Mohammed, an operative of the Commission. The witness told the court the circumstances that led to the arrest of the defendant. Incriminating documents and materials recovered from the defendants were tendered and admitted in evidence.

Thereafter, Akoja urged the court to consider the admission of guilt by the defendant, testimony of the sole prosecution witness as well as the exhibits tendered to convict the defendant as charged.

Justice Akinpelu in her judgment found Ridwan guilty on the two counts.

The Judge sentenced the defendant to six months imprisonment on each of the two counts, which would run concurrently with an option of a fine of N100,000 (One Hundred Thousand Naira) on each count.

Rapper, Da Brat and her partner Jesseca Dupart announce they are expecting their first child together (photos)