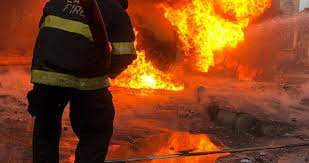 A fire outbreak has killed a minor and seriously injured his two other siblings in the Danbushiya Community in Kaduna.

The fire which gutted the family house of the children happened around 10 pm on Sunday night.

According to reports, the parents of the children were not at home when the incident happened. The cause of the fire is yet unknown.

A resident who simply identified himself as Malam Ibrahim said all efforts to rescue the child failed. He said people could hear the deceased screaming for help but they could do nothing to help him as the fire had gutted the room.

“The boy that died was a minor while his two siblings, a boy and a girl, were seriously injured and rushed to Barau Dikko Teaching Hospital.  What happened was terrible.

We tried our best to break the door since their parents were not at home at the time of the fire incident but we couldn’t enter because the door was locked. Fortunately,  the two siblings were rescued through the window,” he said

It was further gathered that the parents who later returned fainted out of shock and were rushed to a hospital that night.

US soldiers numbering 200 are sent to Ukraine to train military troops as Russia denies planning to invade despite amassing 130,000 soldiers (photos)