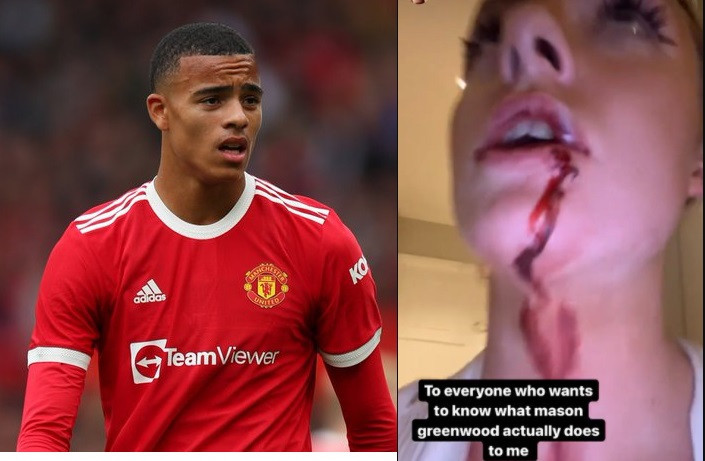 Women’s Aid charity has warned Manchester United and the Football Association that the ‘world is watching’ as they deal with domestic violence and rape accusations made against Mason Greenwood.

Greenwood was arrested on Sunday January 30, following allegations of rape and assault made on social media by his girlfriend, Harriet Robson. The 20-year-old has since been suspended by United with immediate effect.

Reacting to the case,  domestic violence charities told Sportsmail that football’s response to Greenwood’s arrest would be scrutinised across the globe.

Farah Nazeer, chief executive of the Women’s Aid charity, said: ‘We at Women’s Aid share the shock and distress of everyone who has heard the recording and seen the visuals of Mason Greenwood’s alleged abuse.

‘It is vital that all employers, as well as authorities, recognise domestic abuse as the serious crime it is. Manchester United, the Football Association and police must take action accordingly.

‘This is likely to be a high-profile case, and we and the world are watching – men, women, boys and girls who look up to athletes as heroes need to know that there is never an excuse for abuse, no matter who you are.’

Women’s Aid revealed that they have experienced an uptick in donations and direct debits from the public as the Greenwood story gathered pace.

According to Mail Online, the level of evidence required to prove allegations can be high and last night another charity, Refuge, told Sportsmail that this becomes even more of a challenge when the accused is well-known or famous.

Ruth Davison, Refuge CEO said: ‘The audio and transcript released will have been triggering for many women.

‘The fact that a woman has felt that she had to record what appears to be sexual abuse shows the level of evidence women are expected to obtain in order to be believed. This is amplified when the accused is famous or has significant wealth and status

‘Abusive men use the threat of women not being believed to try and silence them. ‘No one will believe you’ is a threat used to control and intimidate.

‘Speaking up about abuse can be incredibly difficult for survivors. Especially when the accused has significant status. Speaking up takes courage and resilience.’

Lord of the Rings star, Pete Smith is dead