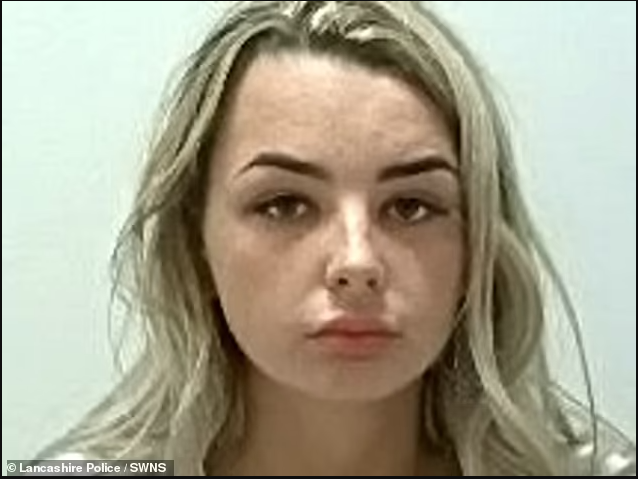 20-year-old lady jailed for faking her own kidnap in a bid to con her ex-boyfriend out of £2,000 so she could buy Christmas presents for her family

A woman who faked her own kidnapping in a bid to con her ex-boyfriend out of £2,000 so she could buy Christmas presents for her family, has been jailed for 34 weeks.

Leah Jumeaux, 20, from Blackpool, Lancashire, sent pictures of herself bound and gagged next to a gun to her partner in October 2020, a court heard. She posed as a kidnapper in the messages and demanded a ransom of £2,000 in exchange for her own safe return.

Sadly, the bizarre plot failed when they reported kidnap to the police and she was forced to admit her lies.

In an interview with the police, she confessed to making up the kidnap story because she wanted the money to buy Christmas presents for her family.

Jumeaux appeared before Blackpool Magistrates’ Court in September charged with blackmail and fraud by false representation. She was bailed ahead of a trial at Preston Crown Court but pleaded guilty to the lesser charge of fraud on Friday.

Jumeaux was sentenced to 34 weeks in a young offenders institution and must also pay a £156 victim surcharge.

‘She staged a kidnap in a failed attempt to con money out of a former boyfriend, posing tied up with a gun next to her.

‘When the matter was reported to police, Jumeaux’s story quickly fell apart, with her admitting in interview she wanted the money to buy Christmas presents for her family.

‘I hope a custodial sentence will give her time to reflect the gravity of her actions and learn from her very serious mistakes.’

Kanye West responds to those asking him to invest in NFTs