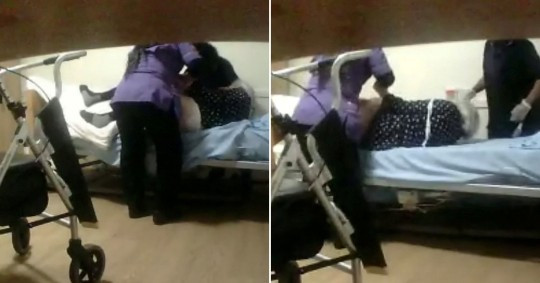 Two care home nurses have been caught on a spy camera dragging an 85-year-old woman with dementia across her room to a urine-stained bed.

The victim’s family reporteldy installed the camera after becoming suspicious about her treatment at Claremont House care home in Halifax, West Yorkshire.

The nurses have been identified as Mamello Herring and Maria Jackson, and they dragged Angelina Lanera, then 85, from a toilet back to her bed with her knickers around her ankles.

Lanera was heard screaming and crying in distress, but the workers continued to manhandle her using a banned ‘drag lift’ technique.

They then left her on the urine-stained bed, where her son Michael found her the next day. As well as having dementia, Ms Lanera suffered from psychosis and is partially blind. She also uses a walking frame and needs the help of two carers to use the toilet.

Herring previously pleaded guilty to ill treatment by a care worker and was given an 18-month community order and 250 hours of unpaid work.

She did not appear at the Nursing and Midwifery Council (NMC) misconduct hearing this week, but told the panel she was ‘working in a demanding role, working long hours and was exhausted’ and her actions were not ‘wilful or deliberate’.

Though Herring claimed her action was ‘motivated by her awareness of more pressing tasks and that she is deeply ashamed of herself’, the panel concluded that ‘nothing short’ of a striking off order would be sufficient.