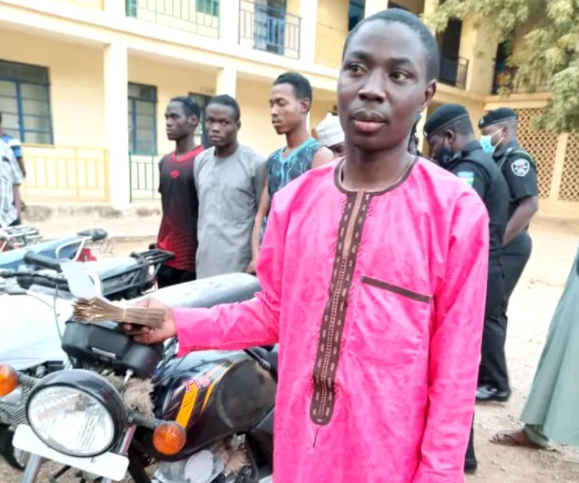 Man arrested for robbing old woman of her gratuity in Katsina

The Katsina State Police Command has arrested a 22-year-old man, Aliyu Abdullahi, of Kasuwar Mata street in Funtua Local Government Area of the state for defrauding an unsuspecting old woman of her gratuity using her ATM card and eventually bought a car and motorcycle from the proceed.

Aliyu who has been described as an unrepentant ATM fraudster is said to specialize in defrauding unsuspecting members of the public by swapping their ATM cards, said he was once arrested but was bailed by my lawyer after spending one month in prison.

Aliyu, who has now returned to police custody again, confessed to having deceitfully swapped the ATM card of one Maryam Sale, of Sharar Pipes in Katsina metropolis, withdrawing her gratuity and lifetime savings, amounting to the sum of one million, eight hundred and forty-six thousand naira (N1,846,000).

“I was at the ATM to make a withdrawal when she came in Keke NAPEP and asked me to help her withdraw N10,000 from her account using her ATM. Before withdrawing the money, I checked her account balance and saw that there was good money inside. Immediately I withdrew the money for her, I swapped her ATM card with mine. After she left, I proceeded to a POS and started withdrawing the money. It took me three days to clear the money in the account completely.”

When interrogated on the whereabouts of the money, the fraudster said;