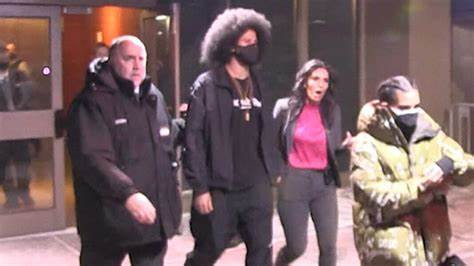 Former NFL star, Colin Kaepernick was heckled on his way out of Madison Square Garden on Wednesday February 2.

The jerk was heard loud and clear as Kaepernick left the Knicks game in New York and got into his ride … with the man yelling twice, “You’re a bum.” He was also heard saying  “You could never throw a football.” “Get in that car,” the heckler added.

Kaepernick never acknowledged the man, and quietly walked through a swarm of people on his way out of the NBA game into a waiting car.

Inside of the arena, the former NFL star had a much better time as he sat next to Spike Lee, and was also spotted chatting it up with former MLB star CC Sabathia before tip-off.

During the game, ESPN Films announced a new docuseries was in the works about Kaepernick who has been out of the league since the 2016 season, with the production company saying Lee had been tapped to direct it. Officials promised it would tell Kaepernick’s story in a way that’s never been heard before.

“I will have no regrets for the rest of my life”