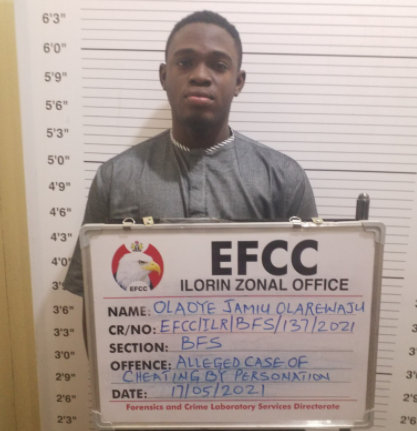 A statement by the antigraft agency says Olaoye was convicted alongside one Badmus Ridwan Moyosore, a native of Ibadan, Oyo State and one Abdulsalam Ibrahim from Malete in Moro Local Government Area of Kwara State, over similar offence by Justice Adenike Akinpelu of the Kwara State High Court sitting in Ilorin.

The trio of Olaoye, Badmus and Abdulsalam, who were prosecuted separately by the anti-graft agency pleaded guilty to their respective charges.

Following their pleas, counsel to the EFCC, Rasheedat Alao called witnesses who are operatives of the Commission to review the facts of the cases.

In the same vein, the testimony against Abdulsalam was to the effect that he was involved in “sugar baby relationship scam” and that over N18million suspected to be proceeds of unlawful activities passed through his account.

The extra-judicial statements of the defendants, fraudulent documents printed from their devices and items recovered from them at the point of arrest were tendered and admitted in evidence.

Alao, thereafter urged the court to convict the defendants as charged.

In her judgment, Justice Akinpelu held that the EFCC had established its cases against the defendants. Consequently, the court pronounced the defendants guilty.

The judge sentenced Olaoye to a term of six months imprisonment with N150, 000.00 (One Hundred and Fifty Thousand Naira) as an option of fine. The court also ordered that an iphone which he used to perpetrate the crime and the draft of N400,000.00 (Four Hundred Thousand Naira), which he raised as restitution be forfeited to the Federal Government.

The judge also ordered the forfeiture of a Toyota Camry Car, two phones and a laptop used by the convict as an instrument of the crime to the Federal Government