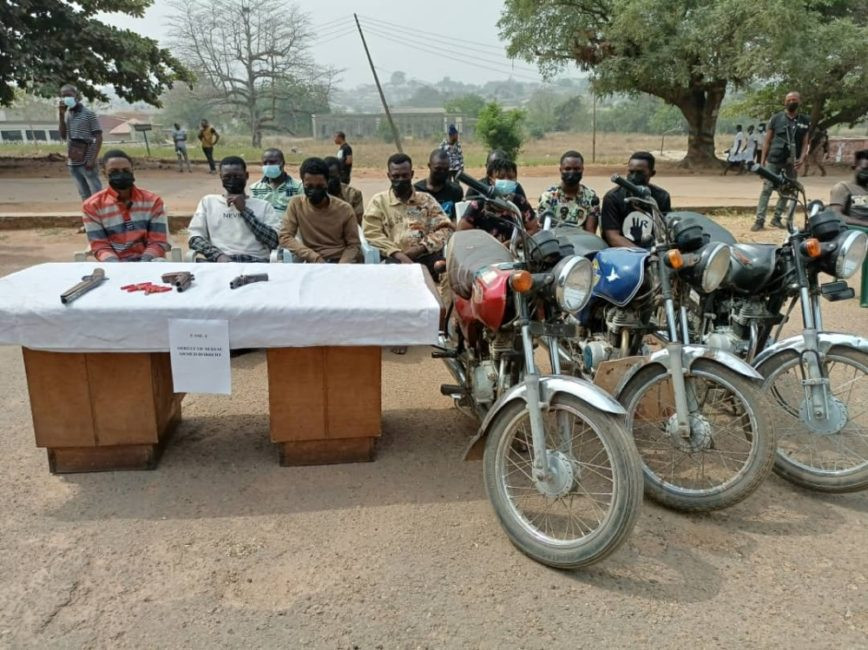 The police in Oyo state have arrested the suspected members of a kidnapping syndicate terrorizing commuters along the Lagos/ Ibadan expressway.

Abubakar and others were arrested after they struck at Onigaari axis on the expressway on January 7, killed a commercial driver, shot a passenger and kidnapped four victims.

CP Onadeko said after the incident, the command, apart from sending operatives into the forest surrounding the area to comb it for the rescue of the victims, swiftly deployed intelligence to fish out the perpetrators.  This, she said, led to Bashiru’s arrest, and during interrogation, he mentioned Babuga, Bellel, Ibrahim, Buyo, Habu Kosoko, Danliti and one with the appellation ‘On Top,’ currently at large, as members with whom he carried out the kidnap crimes.

Bashiru also confessed that on January 6, at about 8:00 p.m, he used his motorcycle to convey Bellel and Ibrahim into the bush at Onigaari where they alighted before striking the following day.  He told the police that his role was to supply food and hard drugs to the kidnap gang members whenever they were in the forest.

The police commissioner said that preliminary investigation indicated that the arrested suspects had knowledge of the January 7 kidnap operations, while the forensic analysis of their phone numbers linked them with the crime.

Two of the victims, Opaleye Folahan and one Sekinat Tiamiyu were said to have identified the suspects as part of those who kidnapped them.

Folahan, who narrated his experience to journalists, said he was coming from Lagos with his pregnant wife and daughter when the kidnappers emerged at about 8:00 p.m. and shot him in the neck. He mentioned that they initially took him, his wife and daughter into the bush, but shortly after, set the wife and daughter free, in order to facilitate quick payment of ransom. Folahan said he paid N2.75 million as ransom before he was released.

Also shown to journalists were another six kidnap suspects who were arrested in a brothel at Akinyele area of Ibadan on January 11 at about 2:30 a.m. through intelligence-driven surveillance by operatives of the state Anti-Kidnapping Squad (AKS), led by CSP Olawale Tiamiyu.

The six suspects, Adamu, Umaru, Sanda, Abubakar, Haruna and Aliyu (surnames withheld), were among inmates who escaped from Abolongo Correctional Centre on October 23, 2021.