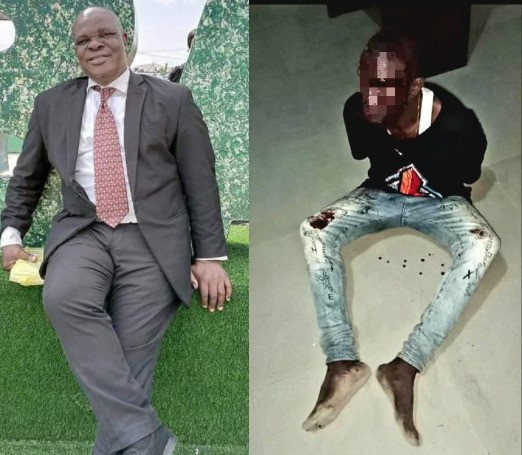 The police in Imo state have arrested a suspected cultist, Deberechi Chukwu, pictured right, who allegedly killed a retired Chief Supretendient of Police in the state, Christian Kpatuma, pictured left, on February 1.

A statement released by CSP Michael Abattam, spokesperson of the state police command, says a group of young men suspected to be cultists in Mgbala Community Agwa in Oguta LGA of Imo State, conspired amongst themselves and went to the house of late Kpatuma, abducted and took him to a nearby bush where they killed him and later carried the corpse back and dump it in front of his compound.

He said on receiving the information, the state Commissioner of Police, CP Rabiu Hussaini psc, immediately dispatched the ever active and gallant command’s tactical teams to the Agwa Community with a mandate to fish out the perpetrators of this dastardly act.

Abattam said on arrival, the teams commenced a discreet investigation and that after diligent gathering of both forensic and technical intelligence, one of the suspects, Deberechi Chukwu, the leader of the cult group that killed the retired police officer, CSP Christian Kpatuma was arrested while escaping to a border state .

”In the course of Investigation, it was revealed that, the suspect, Deberechi Chukwu is a notorious kidnapper and an escapee from the Imo Correctional Center Owerri, Imo State. The suspect, after escaping from the Imo Correctional Centre, recruited young men into his cult group and were terrorising the Agwa community. It is also, on record that, he was involved in the killings of a lot of security personnel in the state. However, he has made useful statement and have volunteered  assisting the police in the arrest of other members of his gang presently, on the run.” Abattam said

He mentioned that CP Hussaini has urged the police officers to intensify efforts in ensuring that the other suspects are arrested. He advised the good people of the Community and the Vigilante Groups to work in collaboration with the police and give credible information that will assist in the arrest of other suspects.